Our Lady of Ro

That would be Δέσποινα Αχλαδιώτη, Despina Achladioti, who was born in 1890 and brought up on the island of Καστελλόριζο.  The official name of the island is ironically Μεγίστη aka The Greatest because it is the smallest of the Dodecanese islands. These are also ironically named because there are not 12 of them. It is hard to decide what counts as one of the Dodecas and what is a 'dependent islet'. The only table of areas I could easily find was from Wikipedia's Italian Islands of the Aegean;
Even those are 13 in number. I've added in Leros and Agathonisi, which didn't come under Italian rule between 1912 and 1943 because they were too far North. Which brings the total up to 15. There are others, which are still smaller, several of which are inhabited since antiquity until today: Alimia Arkoi Farmakonisi Gyali Kinaros Levitha Marathos Nimos Pserimos Saria Strongyli Syrna and Telendos. You notice that Ro Ρω doesn't feature on this diminishing-size list because it is only 160 hectares in extent. Here it is, blown up to visibility. 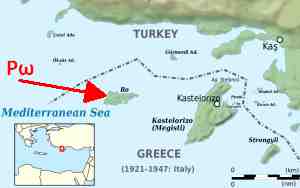 The dotted line that joggles and wiggles across the map is the border between Greece and Turkey. So you can see how close Ro is to both the border and the Turkish mainland. Despina grew up, got married and in 1927, set out for Ro is a ro-boat (ya couldn't make this up) with her husband and settled there with goats and chickens and a little garden. Every day she raised the Κυανόλευκη Cyanoleuki the Greek flag aka The Blue'n'White, and every night she brought it down. Remember, at the time Ro was Italian territory, so Despina was putting it to Mussolini as much as she was waving defiance at the Turks across the water. Just to get an idea of how edgy this is, note that we are East of Rhodes here and indeed Strongyli [far right just above the scale bar on the map above] is the most Eastern extension of Greek hegemony . . . if you acknowledge the reality that Cyprus is a different country.

When Despina's husband died in 1940, she brought out her aged mother to keep company until she in turn passed away. Despina continued to assert the Greekiness of Ro until she herself died in 1982. She has since become a secular saint for Greek nationalism. An unfortunate squad of army conscripts is currently stationed there to continue showing the flag, and presumably periodically paint Despina's tomb [L in the sunshine] white and the railings blue. Because of Despina's memory and political significance, it would mean loss of job for any Minister of Defense who suggested that the whole exercise is a waste of money. otoh, just a couple of weeks ago, the Greek soldiers fired warning shots at a Turkish Coast-Guard helicopter which came to close for comfort.

Where's the Science? They cry. I thought it Matters. Now here's a funny think about the perception of colour. The name of the flag is either Κυανόλευκη Cyanoleuki or Γαλανόλευκη Galanoleuki both of which mean blue&white because we have only one word for dark Oxford and light Cambridge [that's a boat-race reference] blue but Greek has μπλε dark (modern Greek doesn't have a B so they use MP instead: μπλε is really ble) vs  γαλάζιος light galazios different words, with a couple of pale synonyms κυανός, γαλανός cyanos and galanos. Russian also has this distinction: голубой lighter blues (“goluboy” which is clearly the same root as γαλανός the Greek equivalent) and синий darker blues (“siniy” which looks suspiciously like cyan). Russians can process colour discrimination quicker among the shades of blue than Anglophones, because the two words help hard-wire the perception of colour. My cousin Trevor thinks something similar.

And according to the BBC, Turkish also makes the distinction: mavi and lacivert. You'd think with such a deep-rooted commonality, the two nations would stop throwing shapes over uninhabited rocks and about who invented coffee and kebabs and baklava and start celebrating their shared culture.Tsk!

More Islands
Posted by BobTheScientist at 07:35