I happened to look out of the window at 2100hrs on Wednesday night and saw a bright object cruising steadily across the sky from West to East. That must be the International Space Station, I thought; and I was correct. I've been in a similar position before when I made some calculations about view-time. There is a LOT of stuff up there maybe 18,000 chunks bigger than your pancreas. I also thought I saw a much fainter object in more or less the same orbit following the ISS a few degrees behind. If you missed it you can catch it at about the same time over the next few nights.

In late 2016, the Chinese managed to lose control of their Tonka Toy. I'm guessing that someone sent a signal to turn the antennae away from the Earth so that Tiangong was no longer able to receive incoming signal. Commenter on MeFi has a different explanation: "I found the problem in the YouTube video linked from the aerospace.org article. It appears that the engineering team attached a schoolbus to the port side solar panel. While this wouldn't affect aerodynamics in space, when the driver exited the vehicle to check tire pressure in March 2016, the students probably reset the radio frequency, thereby breaking contact with Earth. Happened all the time on my bus as a kid. Silly oversight by the Chinese." And don't even ask what the Russians do with antennae up on the ISS. 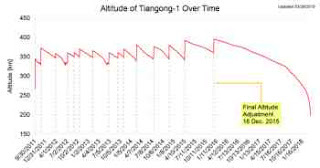 Tiangong-1 is a big lump of a thing weighing in at 8.5 tonnes and one of the key aspects of control from Beijing was to fire up the boosters to push the station further away from Earth. Without those periodical boosts, gravity takes control and the orbit decays until the space station meets the atmosphere. That will catastrophically increase drag and things will get hot up there.  In any case, Tiangong-1 is going to crash our party within the next seven days. Best guess is Easter Sunday 1st April. But as this is a chaotic system - infinitely sensitive to initial conditions - nobody has any idea where the debris will fall to Earth. The closer the station gets to burn-time the better will be the estimates but even with a good estimate the debris field is going to be large and diffuse. When Skylab fell to Earth in 1979, it littered the Indian Ocean [sort of planned] and Western Australia [ooops]. Skylab was about 10x the mass of Tiangong-1. I just thought you should know in case you're inclined to wear a tin-foil hard hat until, say, 5th of April.

Latest from CNN.
Posted by BobTheScientist at 07:45