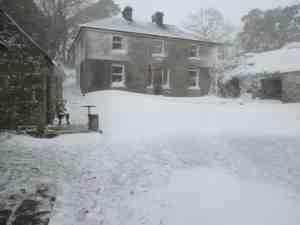 Met Eireann tells us that it has stopped snowing and I can feel that it has stopped blowing quite so hard from the East. I was out in the dark a couple of hours ago, sieving out the ashes from the wood-burning stove and bringing back the warm charcoal to start today's space-heating. It was almost balmy without the wind-chill and the horizontal snow-fall. The Beloved, who was born in Nigeria and grew up in the moderate climate of 1960s Ireland (one cold winter in 1963), like Sarah O'Malley, Everything she knows about Blizzards was learned from Little House on the Prairie. Anticipating a disorientating white-out and needing to check on her sheep, she tied a rope to the back door-handle and snaked it up the steps behind the house; tying the other end to the tree which supports one end of the clothes-line. The other end of the clothes-line is attached to the door-jamb of the poly-tunnel. By hooking on like a trolley-car, with one change of line she could get safely to the tunnel where the sheep were steaming away in relative comfort. The small-small down-side of the rope was that it got covered in snow which was dumped inside the house when I opened the door.

The sheep did much better inside than out, although they and their feed-troughs got a dusting of snow through the gaps in the poly-tunnel doors. Emma's snow was notably light and penetrating. The problem with blizzard is that the sheltered areas fill up with snow while exposed areas are stripped. In the picture at top you can see grass in the lower half of the yard but snow up to the window-sills near the house. A peculiar vortex kept the snow clear from the actual walls of the house on three sides, which made per-ambulation a lot easier. 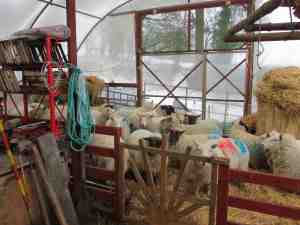 If we had left the sheep out to fend for themselves they would have likely been drifted in; or at least we would have had to struggle through drifts to reach them. Most people would call our sheep 'white', some with black faces; but they look positively Latin American [above R] compared to the white-white of the snow. Note also the Santiago-scallopped gate, crafted by Young Bolivar when he stayed with us in 2016. In the extreme left you can see my red-and-yellow iron bar which I use to make a hole before driving in a wooden fence post. When I wrastled it out of the earth, it brought a clot of frozen earth out with it. Dang! I thought, that will mean the ground will be frozen and it will be hardship driving in a couple of posts to support a temporary gate outside the p-tunnel.

Not a bit of it! There was snow on the ground which effectively insulated the soil beneath and made it soft as shite. Presumably the iron of the bar conducted the cold of the air down into the soil and frozen it deeper locally. In another Pa Ingalls anecdote from the Little House series, he gets benighted by a blizzard between the rail-station and home and survives in an ice-cave for three days eating the children's christmas candy. Earlier in the week I was delighted to see a teeny field mouse skitter across the snow in the fields before disappearing into a hole where it was safe and warm[er].

A few dozen people were stranded in their cars by Storm Emma; the advice from WinterReady.ie [yes, it's a thing] was to stay in the car with the engine running until help arrives. Don't do this in a snow-drift: you'll fill the car and its occupants with carbon-monoxide from the exhaust. A palo-palomino lives close to the N25 the main artery between Rosslare Ferryport and Cork. They noticed a car trapped between snow-banks on the main road and brought the driver into their home for a cup of tea and a bed of the night. Driver was reluctant because The Man had said stay with your vehicle until rescued. The householders e x p l a i n e d  that they were that rescue; the emergency services were dealing with, well, emergencies. Relevant joke about rescue and using your noddle.
Posted by BobTheScientist at 08:00