I was trying some humility in my appreciation that not everyone at The Institute had the benefits of my very expensive education; not everyone has had the opportunity or inclination to row for work or pleasure. The humility comes from realising that, as I grew up: I never birthed a calf, changed a diaper, dug a grave, butchered a rabbit, drove a tractor, laid one brick on another . . . although, in fairness, I could do several of the other things on Heinlein's list of Attributes of Humanity. I picked up some skills later: I hefted my first dead body when I was 17 and working in the local hospital; I was catcher at Dau.II's birth; I've written a sonnet; and built a [low] wall. I figure that many of my students must have skills that I don't possess: on the sports field or using their hands or working in the material world.

If the education we transact at The Institute is to mean aNNything at all, being A Good Pair of Hands must be part of the parcel. We want to turn out youngsters who can saw a plank into 3 equal-sized pieces; who can reliably carry out some industrial or analytical protocol even if it's repetitive or 'boring'.  There is no point in having a bunch of book-l'arning in your head with no possible application in the real world.  I've come to believe that we are so driven by the content of our courses that we lose sight of the process. Indeed 'curriculum' [the running, the process] is now synonymous with syllabus [the facts]. I crashed home on my again this week as I had my end of term maths quiz for 1st Year QM. After the Midterm quiz, I had a ranty post-mortem 2015 and 2016 in which I pointed out where most of the class had gone wrong. In almost all cases this occurred where the real world met mathematics. It is an interface on which the whole of Edward MacNeill's brilliant book Mathsemantics is based.  So I put in Q1 Volume of 44 blocks? and Q4 Period of pendulum? questions again to see if everyone anyone had internalised my passionately expressed explanation from 6 weeks ago.

I also dreamed up another nifty Reality Station question: Q16. If a baby is 0.5m long and 3.5kg heavy at birth, what weight do you expect her to be when she's fully grown at 1.50m? This can be written as an equation - if that helps:

0.5m ∝ 3.5kg == 1.5m ∝ Xkg
where  ∝ means 'is proportional to'. And the obvious answer is to stop thinking and treat  ∝  as equal to =, and solve for X which yields the  answer that an adult woman weighs the same as a 10kg sack of potatoes which you or I can carry with one hand. 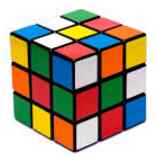 But how, in the biological world, does weight increase as length increases? As we are 90% water and barely float in the sea, our volume in litres is more or less the same as our weight in kilograms. If we increase our length by 3x over 15-16 years we probably/surely increase our width and 'depth' in the same proportion: babies don't start off flat and fill out as they grow. Although the proportions do change as we grow up [prev and prevlier] - babies' heads are massive [see above L] compared to anyone's who can read - we could begin to guestimate the answer by treating us as a cube. A Rubic's Cube illustrates the relative proportions rather well: the new-born is represented by a single Rubic's unit, the whole puzzle = the adult. The length / width / depth increases by 3x . . . so the volume increases by 33 or 27x. Starting weight is 3.5 kg, end weight 3.5 x 27 kg = 94 kg. That's a little heavy but it's in the right ball park and could be a first approximation for a model for the relationship among animals of different sizes as to their height and weight.
Posted by BobTheScientist at 06:36