Orkambi - the state says No

Cystic fibrosis is a medical disorder inherited in an autosomal recessive manner. Autosomal means that CF is equally common in boys and girls. This is in contrast to the common forms of haemophilia [prev] where boys are more likely to have the condition because the relevant gene is carried on the X-chromosome. Girls have an extra X which can carry a normal gene and so compensate for the error on the other one. That is why some of Queen Victoria's sons and grandsons were bleeders but none of the princesses were. Recessive means that you need to inherit two duff copies of the gene to actually get the disease. That's interesting because it shows that so long as you have some active genes, even if only half the normal amount, you'll be grand, if not completely without symptoms.

That's the genetics; the maths indicate that, as about 1 Irish child in 1500 is born with CF, about 1 person in every 19 or 20 is a carrier of the disease. Carriers can also be found in other N European countries but Ireland takes the biscuit for the highest rate. If two carriers get [it] together, then 1/4 of their children will have CF; half will be carriers like their parents; and 1/4 will be clear. You could roll the dice twice and finish up with both kids affected. Why this works. As with Tay-Sachs, you can get yourself tested at the National Children's Hospital to see if you are a carrier.  It's not worth it to check everyone but if your partner or you come from a family with CF running through it, it might be a good idea. One of the problems with the genetics and the testing is that there are several different ways in which the gene can be banjaxed. It helps to explain what the normal gene does.

We are tunnelled with mucus membranes: lungs, nose, sweat glands, vagina, vas deferens, gut . . . oh, and don't forget the pancreas. Wherever the body meets 'the outside' it tends to be wet and managing the degree of dampness is a key to keeping alighting microbes under control. One way to manage the lubrication of the mucus is to fit up epithelial cells with a channel that transports chloride ions across the cell membrane. Water will follow the chloride to equilibrate the concentration on either side of the membrane by a process called osmosis; as with cake-batter, more water = more runny.

This chloride channel is a bit of a mouthful: cystic fibrosis transmembrane-conductance regulator or CFTR to its friends. The R=regulator indicates that, as well as acting as a chloride channel, CFTR also controls the activity of other channels which shunt sodium about to balance the charge as well as the degree of dilution - sodium is Na+; chloride is Cl-. 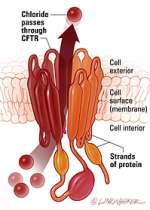 The gene is in the nucleus of each cell, the CFTR channel [R] is, or should be, in the membrane, and getting the one to the other requires a few steps.
If any of these steps fails, then the mucus gets thick and gloopy and tastes salty if you lick it. These are the primary symptoms of cystic fibrosis. Bacteria love this thick protein-rich mucus and the immune system has to work overtime to keep on top of the extra opportunistic pathogens. If it gets overwhelmed, the lungs fill up with fluid and people can die. People with CF are in and out of hospital all the time, often for an aggressive course of antibiotics to help combat the latest invasion. Children with CF need physiotherapy to help move the mucus and bronchodilators to keep the compromised lungs open. If all else fails, and your insurance can afford it, a lung transplant can be carried out.  There's got to be a better way and the multinational pharmaceutical industry is on the case.

The problem is that there are at least 1000 mutations documented in CFTR which cause some degree of failure in the chloride channel. It's possible that you or I have a mutation in our CFTR gene that has so little effect that it will never be flagged unless Our Great Leader decides to sequence everyone's genome for our own good. T334W and T338I are flagged as 'mild', T334W means that 334th amino acid in the protein sequence, normally Threonine T has been replaced by Tryptophan W according to the conventional protein codes. By far the commonest mutation, responsible for about 75% of CF patients, is deltaF508 a deletion of a single amino acid at position 508. This is nothing to do with the channel itself [the hanks of 12 sausages shown embedded in the membrane at the top of the cartoon R]. deltaF508 rather has delivery problems because the absence of F508 makes the folding of the protein go wonk. The word on the street is that if you could ever get a deltaF508-CFTR inserted in the membrane it will function just fine.

A few years ago Vertex Pharma, a Boston based rational drug design company, launched a drug targetted at a particular CFTR mutation G551D - production=complete; a delivery=fine; channel=blocked mutation - called ivacaftor aka Kalydeco. The ball park figure for the cost of bringing a new drug to market (through a forest of trials, a blizzard of paperwork and multiple false-starts) is $1billion. The maths on G551D is that they make up about 4% of the USA's 30,000 CF sufferers. Those 1,000 people are being asked to pay $300,000/yr for the treatment. Vertex may start to show a profit on this revenue stream in the 5-10 years while the drug is still protected by patent. Obviously not every person with G551D will have health insurance or have multimillionaire parents. But this loss is offset by the market abroad. The drug makes you better than you were before because it allows a little chloride leakage but it's a long way from a cure.

A couple of years later Vertex went after deltaF508 with a different drug they called lumacaftor [who dreams up these wholly unmemorable tongue-mangling names? clearly not the marketing department] which was supposedly a chaperone which massaged the CFTR into something approaching normal shape. That prevents it being degraded and also help traffic some of the molecules to cell surface.  You've got to reflect on the fact that the drug has to get from the gut into the blood-stream and thereby course round the body to the various epithelia. then it has to cross the cell-membrane to do its massage trick inside. lumacaftor is being marketed only in combo with ivacaftor under the name Orkambi.  They can market it all they like in Ireland but the National Centre for Pharmacoeconomics NCPE has done the sums and advised against reimbursing the cost from the public purse.

Why? The spoil-sports! Well it's because the cost:benefit ratio doesn't stack up. Sorry to be so utilitarian about it. Possibly because there are more deltaF508s that G551Ds, the cost per year's treatment is 'only' €160,000. But, by one objective measure of lung function, the average Orkambi improvement compared to placebo is about 3%. The other measure preferred by NCPE and their other country equivalents is the QALY [multiprevs on The Blob]. The spokesman from the NCPE was on the radio Monday morning being blunt about matters financial; comparing the cost of supplying 700 people with this one, 97% ineffective, drug to the cost of building the new, and long promised, National Children's Hospital. That evening RTE gave a platform to a chap [the singular of data is anecdote] with CF who had responded extremely well to Orkambi. They quoted a tweet from the Health Minister who wants in an open letter to reassure CF Ireland that the analysis put out by the NCPE is "not the end" which suggests that objective, cost-benefit, QALY based decision-making can be massaged or discarded if it is politically expedient. He has instructed his Department to haggle with Vertex tp bring the price down. NCPE reckons €30,000 /year is the cost-benefit tipping point. But the pay-back time for the company on that price will be 25 years rather than 5 and the drug will be long off patent before the risk-taking venture capitalists have been paid back.

The chair of the NCPE only made his comparisons within the health service. But Ireland Inc. is brimful with blighted lives all of which could be made better with money
Our Great Leader should be able to juggle the numbers rationally, so that the finite benefit of what tax-dollars buy accrues to the greatest number of citizens and no child is left wholly behind.
Posted by BobTheScientist at 06:26