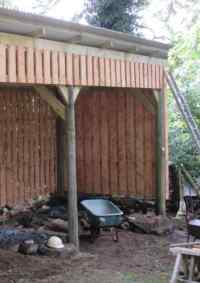 A month+ ago, I posted a bit of philosophy about thrift - not the iconic copper tolerant pink flower Armeria maritima of the Waterford coast but the concept outlined by Victorian political economist Samuel Smiles [blobbotrib for his Self-Help (1859) previously] in his eponymous book, which you can get for free if you are kindle-enabled. There I mentioned the start of a building project on the farrrm which drew a surprising amount of positive feedback from both my readers: "give us more shed" they cried, "enough with the isles, women and song, already" they implied. Well I've spend much of August a) building the shed and b) writing about it: one - two - thr - for - fiv - six. Those fans of sheds are chewing their beards now, having had quite enough shed for 2016. I think this is the last of the series, because I think we're finished and I think Young Bolivar is setting off into the wild wide world in a few days and I know I'll be back at paid work from 1st September. The shed is up but it appears [R] to be hanging from the roof like a curtain - which is a sense it is: preventing the rain falling on the interior and reducing the gales to 'ventilation'.

The roof is level, the gap between the bottom of the wall and the good earth is 150mm at the top and between 650mm and 750mm [it's rough] at the bottom. I can lay blocks, I have laid blocks but I don't do it well, so I asked Young Bolivar to fill in the up-side gap with concrete blocks [see L] to minimise the ingress of water from the yard above; that's where the flood will come from, if it comes at all. While scrabbling the dirt away to put in a gravel foundation we discovered a black plastic Wavin pipe that we'd installed when we were excavating the site a year ago. It fits an existing upstream pipe and we ran it off and away through and under the shed-site using a 3m length of Wavin and then extending it with yellow plastic perforated drainage pipe which snakes down and out under the lower wall. You block existing pipes, even if they appear dry, at you peril. We had to cut a block [see inset R in picture L] to accommodate the black pipe.

In the middle we've found 4 nice curb-stones each 200mm high and put a mid-step of that height to minimise the amount of back-fill necessary to have a level floor. Having two level floors saves us having to find and 3 or 4 tonnes to fill a 200 x 2400 x 3600mm space - win! [L step with hard-hat for scale and to prove that we did have PPE on site]. The middle stone is perforated by two holes which originally had a couple of rusty iron bolt-heads. That might help anchoring a dividing wall.

For the lower wall [L with trusty and much-used iron barn for scale], we could have used blocks as well but went instead with existing rocks that were available for free on and about the site. I think it looks more 'in keeping' and vernacular architecture although it's not possible to see the work from the front gate. The back fill under the floor and behind this retaining wall enabled us to bury a lot of gnarly and round stones that were useless for building. I filled and emptied or venerable perforated steel builders wheel-barrow many times for the fill.
Finally we top dressed the floor with 804 aka 2-down limestone gravel which will pack down into a solid dry surface that we can start to store logs on. Dilemma: do we want to stack the wood on pallets to keep them drier and better ventilated OR do we want to stack directly on the floor to minimise rat runs. Compromise: last night I put down a very old egg-carton & veneer interior door and started stacking wood on that.