It's been a grim week on The Blob talking about disease and dishonesty, lack of compassion and lack of leadership in the continuing saga of the anti-D/HCV Blood Tribunal story. But we can put this is perspective. Something like 1200 Irish women of child-bearing age were given a medical intervention / prophylaxis / treatment and finished up chronically sick as consequence. That's very sad for the women and their families. The therapy in and of itself, however, was a Good Thing. In the 1960s, 40 newborns a year would die from erythroblastosis fetalis as a consequence of  maternal/fetal Rheus incompatibility.  With anti-D for everyone for the last 45 years, we have stopped 40 x 45 = 1800 neonatal deaths. For a naive utilitarian that's a bargain. Of course, we'd prefer to win on all fronts and it is a shame that the women were assaulted by a system that, in hindsight, was not fit for purpose,

But HCV is a global problem: about 3% of people on the planet are infected. That's 200,000.000 mostly poor, tanned, tropical people whose liver is being eaten away by the virus until they develop jaundice, cirrhosis, hepatitis, liver cancer and an early death. There is no cure for those people and the drugs for reducing the symptoms cost €15,000/year: a number laughably beyond the capacity of folks or governments in the Third World. By contrast, the 600 anti-D/HCV infected Irish women comprise 0.01% of the population.

Wouldn't it be just bonzer if we could do the fundamental science necessary to understand how HCV evades the immune system and use that as the foundation of a scheme to by-pass or nullify the evasion and prevent HCV getting a reproductive toe-hold inside 200 million people who have enough troubles. Genetic epidemiological studies are complicated by the fact that both the host and the virus a variable. HCV is particularly variable, indeed, because as a single strand RNA virus its enzymes are particularly inaccurate when they make copies of the genome. Every HCV virus is different but they fall into 7 named and characterised serotypes. Callous as it may sound, the anti-D debacle has been a controlled experiment to record and try to understand different immune responses to the same insult. 1200 young white Irish women were infected with HCV from a single defined source. The Irish are less genetically homogeneous than, say, Icelanders or the inhabitants of Tristan da Cunha, but still the anti-D demographic is pretty tight. Nevertheless they showed an interesting diversity of responses to unasked for infection by HCV: 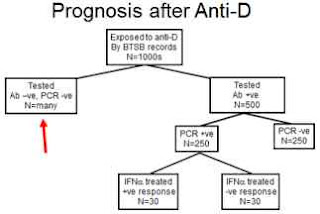 This diagram, which I knocked up about 10 years ago, requires a certain amount of explanation. The top box asserts that, of 70,000 Rh-ve women who were given anti-D, about 1200 were, according to BTSB records, given anti-D from one of several vials that were contaminated with HCV. Now, we have seen in earlier posts that BTSB couldn't run a piss-up in a brewery, so we must be skeptical about their paper-trail. Nevertheless, it helps limit the number of women who can claim compensation for illness and distress caused by the anti-D scandal. Of those 1200, about 500 were called back to hospital to give a blood sample and were found to have antibodies against HCV. These Ab+ve women must have had HCV circulating in their systems long enough [3-5 days] for the adaptive immune system to make antibodies against it.

Of these Ab+ve women, about half are PCR negative and half PCR positive. PCR = polymerase chain reaction is a nifty molecular biological tool for making millions of copies of any DNA/RNA to which it is applied. PCR +ve implies that, although an antibody response was mounted, nevertheless, HCV is currently circulating in the blood stream and presumably multiplying in the liver. Ab+ve/PCR+ve have the worst prognosis because their immune system hasn't been able to get on top of the virus. Ab+ve/PCR-ve are in a better position because there is now no circulating virus which means that their adaptive immune system did clobber the virus. Although, like chicken pox / varicella bursting out decades later as shingles, the HCV could be lying dormant in liver cells and start its destructive action all over again much later.

The one therapy that seems to work towards making life more tolerable is interferon-alpha aka IFNa. It is 10x cheaper than some other modern medicine but nevertheless costs about €15,000 a year . . . every year . . . until death intervenes. But a pilot study, in which 60 women from the anti-D cohort were given IFNa, found that only half got any relief from the symptoms. The others had a clatter of wearing side-effects: pains, fevers, chills, nausea, drowsiness, lethargy, headache as well as the ills due to having a banjaxed liver. Work is afoot to identify markers strongly associated with being a responder or non-responder. If IFNa therapy is not likely to work, why not save the state €15K and the patient an extra dollop of unhappiness.

But the most interesting group of women are those indicated with a red arrow above. According to the records, they were exposed to the virus but are antibody-ve and PCR-ve. It's as if the virus had never been there! The presumption is that it got swept up and destroyed really efficiently by the innate immune system before the big guns of the adaptive/antibody immune system kicked in. The innate immune system is comprised of the first-responders in the fight against infection, these chemical and cellular entities react quickly and forcefully to damage or difference. And sometimes this rapid clean up is so effective that the specialists against dengue, malaria, 'flu, scarlatina, pertussis, and uncletomcobbleyitis are never called in from the golf course. Wouldn't it be great if we knew what these women had in them that mounted such an effect response against HCV? Wouldn't that be useful information to pass down the chain to the Third World? Knowing accurately in detail what went wrong is often the first step in developing a therapy. In this case, it will be knowing what went right; but the possibility of a therapy for the 200,000,000 is made more likely.

After 20 years of thinking about it, a group of immunologists in TCD have finally gotten approval and the money to make a start on this project. The first step is to identify and contact these super-innate women and persuade them to give 10ml of blood . . . again.  They gave already, 20 years ago, to get the all-clear, now the TCD immunologists want to see if, for example, they all carry a particular mutation in a key immune modulating gene.  If you are, or know of,
then you have the potential to do a lot of good for poor black people. More information, including contact details, on Facebook [of course] and at TCD: email: TCDStudy2016@tcd.ie They'll give you a nice hot cup of tea after your blood donation.
Posted by BobTheScientist at 06:41