A few years ago, I was at the English Scything Fayre at Muchelney in the Zummerzet Levels. There had been a plan to have me as a handicap on the Irish team, but we were delayed on a trip by narrow-boat down the River Avon and arrived too late to participate in the team event.  I did trial for individual competition but didn't "make the cut" [Hoot!, a pun, we must be in England].  I was only a beginner then and my 1m x 5m strip looked like very bad haircut when I had finished: all tufts and baldness.  Chris Hayes and Shannon père et fils athair agus mac were able to recruit a ringer with an Irish grandmother and did creditably in the competition. It's that time of year again and the British & Irish Scything Association have put up the results of last Sunday's competitions in Muchelney. If you're struck by the fact that Andi Rickard won the ladies championship by a staggering margin, and placed a creditable fourth in the Open stakes, so may want to see just how she did it.  I suspect that, if her rep didn't depend on it and/or she had to mow a acre, she'd compromise to a narrower swing. But it's wonderful to see what can be achieved in silence by a human being using appropriate technology. The French are asking débroussailleuse vs Faux, quelle est la plus rapide? The strimmer takes twice as long and destroys the peace on the Sunday afternoon with its shrieking. The scyther featured there (probably 2010) is Simon Damant overall champ for 2015, so he's not losing his touch.

The competition squares are a perch in size, this is an area 6.25 yards square, as near as dammit to 25sq.m. It is a peculiar, quintessentially Thomas Hardy, sort of measure until you reflect that it is 160th of an acre. If an ace scyther can knock their perch in 2 minutes, that suggests that an acre could be done 2hr40mins.  Four acres on a long Summer's day?  With time for copious draughts of rough cider? 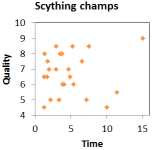 One issue which is exercising the scythers is how to weight speed and quality when assessing one mower against another.  I can lick through my square and leave half the grass for the rabbits while Simon Damant or Andi Rickard will win almost all the grass as hay against a hard winter. This is a problem that an evolutionary biologist can relate to.  There is no such thing as perfection in the natural world; there is only good enough to survive and reproduce. In mowing you don't need to obsessively cut every daisy but you want to save as much hay as possible between showers.  It turns out <data alert!> that there is no correlation [L scatterplot with correlation coefficient r=0.08 =~0] between quality and speed among the 24 [two dozen] finalists.  Now we all agree that time is of the essence in the uncertain English climate but quality needs to be sensibly factored in; so how about:

score=speed *10/quality
If you achieve perfick quality then your speed would be the result whereas if your quality is 5, your resulting time is 2x your actual time. There is a smaller penalty if your quality is damned good. If you want an existential discussion on Quality try Zen and the Art of Motorcycle Maintenance.  On that basis, here are the results:


The scythers on the ground in Muchelney preferred to deal with the speed vs quality issue with a clapometer, and "The judges awarded places (as above) on speed but also taking quality into account".  My ordering is slightly different - Rickard pips Coleman for example - but everyone knows how my results were calculated.  If anyone wants to come down and help mow our Home Field in early July, there will be cider!
Posted by BobTheScientist at 09:31