Civilised people of the current time tend to be prissy about death and particularly about doing people to death. If we think that somebody or some animal needs to be terminated, we want this done 'humanely'. We'd like to think we've come a long way since 1209.  In that year, during the Albigensian crusade, the siege of Béziers was finally ended in an assault by the Catholic army. When asked how the sacking-and-pillaging soldiers were to distinguish between the heretic Cathars and the innocent Catholics, their commander Arnaud-Amaury, Abbot of Cîteaux, replied "Caedite eos. Novit enim Dominus qui sunt eius" [Kill them all, for the Lord knows them that are his]. And everyone in the city was slaughtered. Today we reserve that casual 100% solution to cattle, especially in the face of foot&mouth, TB or BSE, in our crusade for more hamburger. We don't go wholesale at people with a captive-bolt humane killer because that wouldn't be humane . . . except for race-horses and crippled sheep and animals in the chute on the way into the abattoir.

I've recently deprecated the sciencification of the death penalty in Oklahoma and other US states and suggested that the American justice system might build on one of the country's strengths and use a firing squad to expedite the final moments.  At least that won't allow a poorly researched and hard to administer 'scientific' practice to demean science. It won't be the first time that science has been brought in to make being pushed across the Final Frontier more humane.  Fade to 21 December 1821, Burrin Street, Carlow in the Irish Midlands . . . 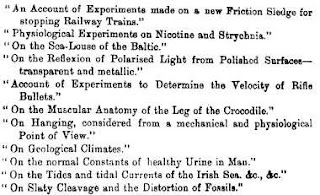 Samuel Haughton was born just before Christmas 1821 in the family home near the bridge over the River Burrin.  He was a clever young Protestant chap and in due course went to Trinity College Dublin to read Mathematics but he excelled in a quite embarrassing range of scientific subjects [R from his obituary notice]. He was indeed one of the great Victorian polymaths. He was made a Fellow of TCD almost immediately after he graduated, was Professor of Geology for 30 years, but took advantage of his easy teaching load to study medicine for his own MD and held the post of Registrar for the University Medical School.  I could blog for the next two years about Sam Haughton and his contributions to science but I'll just talk about the 7th item on the list [R above]. “On hanging considered from a Mechanical and Physiological point of view.” which was published in the London, Edinburgh and Dublin Philosophical Magazine and Journal of Science in 1866, a journal that will not win prizes for the snappiest title.

Haughton wasn't the first to recognise that you could finish felons off quicker if you dropped them from a great height than if you threw a noose over a tree and hoisted the strange fruit up until their feet were no long in contact with the ground.  In his paper, Haughton offered some mathematics about kinetic and potential energy, inertia, momentum, force and foot-pounds to show that he could understand physics [not me!] but knew that hangmen across the empire, not being Fellows of TCD, would need a simple formula. He suggested to divide 2240 by the weight of the perp in pounds and use the quotient as the length of the rope in feet.  This works out at 10ft 5in or a little over 3m for a man weighing 180lb = 80kg.  Heavier chaps get a shorter rope and women and children need to fall further - James Short, a child of 14 was hanged in 1783 in Dublin.  McCartney and Whitaker were clearly asleep at the switch when they wrote "Haughton drop is measured in feet and is the weight of the felon in ounces divided by 2240" in Physicists of Ireland: Passion and Precision. That would give 180 lb (80kg) me a drop of 14 inches (35cm) barely enough room to fit my enormous head under the gibbet.
You might well ask why 2240 should be used in the equation - why not 2000?  It's because 2240 is the number of pounds [lb] in an imperial ton of 20 hundredweight [cwt] each of 8 stone [st] each of 14 pounds [lb] . . . each of 16 ounces [oz]. Haughton wanted to keep it simple as the Imperial system of weights and measures construed 'simple'.

Haughton's paper was widely read (at least in London, Edinburgh and Dublin) and two years later Capital Punishment Amendment Act 1868 was passed which required that all executions were to be carried out within the ground of prisons rather than as a raree show outside. Out of sight put out of mind the disposal of the undesirable elements of society and so allowed the death penalty to be employed for another 100 years on these islands.  The first 'private' execution after the Act was carried out in Dublin on Andrew Carr.  The local hangman, against advice suggesting 8ft, thought that Andrew Carr needed 14ft to die quickly. Mr Carr's head was ripped from his body which made a bloody mess of the proceedings.  But those Utah firing squads must also take a bit of clean up.

No harm in a bit of gallows humour. The official executioner for about 20 years after 1868 was an ex-cobbler called Marwood which allowed for the riddle:

"If Pa killed Ma, who'd kill Pa? Marwood!"
Marwood is credited with the practice of putting the know of the noose just under the left ear and he maintained that jerking the head sharply to the right was more effectual to the killing than the length of the drop. Execution is not tidy but I don't see how hanging is less 'humane' than what they did to Clayton Lockett in Oklahoma.
Posted by BobTheScientist at 06:15