Last weekend I threw in a handful of movie links about making things that last and the week before it was movies about food which is not destined to last long at all.  In the programme last week, I was a little dishonest/deluded in suggesting that pottery would last forever. Since then I've been on a bit a of jag about pots, potters, kilns, slipware, salt-glaze and bisque. It's been really interesting listening to people who had clay in their blood and have constructed a life for themselves, their families and numerous apprentices out of pots. Mike Dodd suggests (below) that the first pots were created by accident after some fool dropped a clay-lined basket used for holding water into a fire. Decorations on early pots are often from having braids pushed into the wet clay before firing; and the ziggy-zaggy patterns etched or scraped or painted on later pottery could be mystical trace of these origins.  In the same way, Greek temple builders moved from tree-trunks to massive stone for the pillars to support roofs but still felt obliged to flute the columns (= 'bark') and incorporate foliage at the top. There are two issues in the process of firing pottery 1) you need to carry out an irreversible chemical reaction on the flabby clay so that it stays rigid forever 2) you often need to make the clay impervious to water with a glaze.  Glazes are effectively a thin layer of glass bonded to the surface of the clay.  That's all I understand about the process - clearly it will require several years as an apprentice and a lifetime of practice to really internalise what is going on. 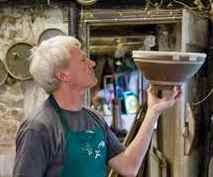 Listening to these masters of craft [L Chris Bowen] it is wonderful to hear them embracing the unforeseen and appreciating that the best of their work happens when they are obsessing about quality the least.  It's not for nothing that zen is integrated into some school of Japanese pottery. Indeed I went off looking for the wisdom of the East and found it in watching a succession of European, mostly, English potters. It makes me think of William "Arts&Crafts" Morris: "Have nothing in your house that you do not know to be useful, or believe to be beautiful" I hope you enjoy (some of) these as much as I did.
And if you follow your youtube nose off to Korea or West Africa, who am I to stop you?
Posted by BobTheScientist at 09:14