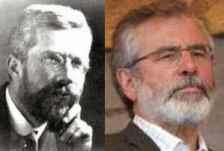 17th February 1890: R.A. Fisher was born in East Finchley in what later became Margaret Thatcher's constituency.  He grew up smart, tetchy, loyal and egotistical.  He also put manners on the subject of statistics as no other person in the 20th Century.  He has been tribbed by Richard "Pappaphobe" Dawkins as the greatest biologist since Darwin.  I'm definitely not clever enough to explain all his contributions.  If you've ever carried out an F-test, or used an ANOVA, or tested a null hypothesis, or carried out Fisher's exact test in preference to Chi.Square, just remember those tools exist because he invented them. Do you think he [L left] looks like Gerry Adams [L right] of Sinn Fein who may well be our next Leader after the next election?  Or is it just the beard and glasses?  Fisher was politically much more in tune with rightists like Thatcher than leftists like Adams.  As well as the Church of England ("the Tory party at prayer"), he was a strong believer in eugenics and worried that The Elite were not breeding enough and so the Quality of humankind was decreasing with each generation. Eugenists could also identify the unfit with self-fulfilling accuracy and pushed, more of less unsuccessfully, to offer to have these people sterilised at government expense - no compulsion, they weren't Nazis; just a handy service the unfit might like to avail of: no pressure. He did his best to remedy the Elite deficit with a lot of unprotected bonking and fathered eight elite children. Nobody seemed to question whether the world would be better for a lot more Fishers.

Sex ratio allows for an interesting classroom exercise in Ascertainment Bias. The sex-ratio of Fisher's direct progeny was about as skewed as our lambs last year - 2M:6F; except in the other direction.  We'd have been delighted to get 75% ewe-lambs. Many people associate Fisher with sex-ratio because he articulated (he was neither the first, nor the last, nor the most clear) the idea that sex-ratio naturally equilibrates at 1M:1F.  His argument ran thus:
So 1:1 sex-ratio is an evolutionary stable strategy [ESS but <TMI alert?>] an idea elaborated, among others, by John Maynard Smith.

Actually, it turns out that sex-ratio at birth is not quite 1:1 - in all societies where these things are recorded (and that is all societies which can count up to two), there is an excess of boys at birth: something around 105M:100F. Boys are fragile in the neonatal period and their mortality is higher than their sisters. Statistics on still-births and from abortions show that this post-natal mortality among boys is a continuation of a trend in utero with the primary sex ratio (at conception) estimated at 130M:100F. That 130 figure is widely cited but it's quite hard to find the data on which this fact is based.  Later on, in many societies including Ireland, the sex-ratio takes another nose dive as boys start to drive cars (far too fast); commit suicide, which may be the same thing; and do silly dangerous things to impress girls and prove that they are well 'ard.  By some age between 25 and 40 the sex-ratio is really 1:1. Thereafter women consistently and increasingly outnumber men of the same age: there are between 5x and 9x more female centenarians.

Fisher did some math and some arguing to convince himself that the human sex-ratio is indeed 1:1 at the time when it matters - when everyone is about to start trying some procreation in their mid-20s. So he was right again, as well as Right. They say he hated to be wrong, which could be said to make him rather a bad scientist. Most of us now reckon his judgement was clouded by pipe-smoke  [R] when he dissed Richard Doll's statistical analysis of association between smoking and cancer.
Posted by BobTheScientist at 06:46