Into the wild for lunch

<Harrrrumph> With the lambing, I needed to fence off a corner of Crowe's to make a temporary pen for some of the ewes as we shifted them about to keep the recent deliveries closer to the feed and safety of our haggard and let the stronger lambs and their mothers out into the grass.  A couple of 50mm fence posts and 12m of sheep-wire was fit for purpose.  The wire did mean an additional hurdle for people who might choose to visit the Ringstone. On Easter Sunday The Beloved organised a mini Easter Egg Hunt which got us all out of the house for a walk down through the fields to the river.  On the way back, I noticed that one of the sheep-pen fence posts had been broken off: causing the fence to sag in a decidedly un-sheep-proof manner. There were no sheep in the field and rabbits and foxes are just not strong enough to snap an oak post.  We own the fields but we don't own the Ringstone and I wouldn't dream of preventing anyone going to view a part of our common culture and heritage.  Occasionally someone from one of the local walking groups will knock on the door saying that there are 40 people about to come up the lane who would like to see the rock-art but the general practice is that people go down the field without troubling to ask.  A fence-post costs €1.20, so it's not about the money, but if I put something up to manage my affairs, I rely on on still being there a few days later.  If I leave a gate open, or closed, I don't want someone else closing, or opening, it because they think it looks better that way.  I've put up a stronger post; do I need to install a stile?  </Harrrrumph> 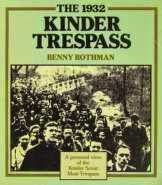 Today marks the anniversary of the famous mass trespass of Kinder Scout in the English Peak District in 1932.  Kinder Scout is the highest point (636m) in Derbyshire and more or less plunk in the middle of the country, conveniently close to Manchester and other major population centres.  It was, and probably is, private property: used as a grouse moor and maintained by game-keepers so that the Duke of Devonshire could go shootin' with his pals.  Down in the stews of Manchester, children had rickets because their diet was insufficient and they didn't get enough access to sunlight.  Furthermore the workers in the factories and offices were beginning to realise that some honest fun and healthy exercise at the weekends could make their lives more tolerable.  It must also be said there was a certain amount of inspiration from the youth movements that were gaining momentum in Germany in the 1930s.  The Ramblers' Association helped organise the mass trespass and there was a bit of a barney between the walkers and some gamekeepers before about 500 people tramped to the peak and looked down on the enormous conurbation that they called home.  There were a handful of arrests and five men were sentenced to some months in jail for affray and assault rather than trespass which was not a criminal offense.  We've come a long way since then, Kinder Scout is now incorporated into the 420km of the Pennine Way - one of the earliest Long Distance Footpaths in England. On fine weekends hundreds of people assert their right to walk in the unspoiled countryside.  In June 1984, we walked 40 km with an American friend along the Pennine Way further North up to the top of Cross Fell and down the other side over two and a half days.  The clouds lifted just as we reached the summit and we could see for miles and miles - it was pretty spectacular.  But a good part of the journey was carried out along a slatted wooden walkways raised up on stakes over the wet moor-land - the pressure of footfall was just too much for the delicate ecosystem below to support.  It wasn't until 2000 that legislation was enacted that gave the public limited rambling rights - until then the Ramblers' Association spent a lot of time poring over old ordnance survey maps looking for marked footpaths to walk along.

In Scandinavia the the default position is that everyone has the right to walk or cycle or canoe or camp on unenclosed land that isn't someone's garden.  You can also pick wild berries and mushrooms and use a fishing rod. In Finland, for example, this is called jokamiehenoikeus or allemansrätten - everyman's right - but similar conventions and legal framework are good in Norway and Sweden.  The implication is that if you go out into the wild you know what you're doing and won't destroy the environment.  The whole arrangement also hinges on there being not too many people.

A few years ago I went mushroom picking in NE Poland.  It can get pretty busy in the woods especially near to access roads during fine weekends in the picking season. I was getting pretty smug about being able to pick the right sort until I brought one to the communal basket and was told to a) throw it far away and b) go down to the lake niezwłocznie to wash my hands.
Posted by BobTheScientist at 07:10