I am the least likely person to espouse the belief that 'exercise is medicine' except in the sense that an adult lifetime of doing no exercise has been associated with virtually no medicine. Eeeee, when I were a nipper, The Man made me do exercise on a regular basis and I was continually sick:  asthma, boils, constipation, depression . . . I could go on.  Indeed me and my  much loved sofa have been exchanging atoms like Myles na gCopaleen's policemen and bicycles for so long that it is often hard to determine who is supporting whom.  It would be infinitely hard for me to run a half-mile because I'd have to drag the ould sofa along with me like a monstrous handicap.

I was prepared to give Prof Niall Moyna's talk on the subject a miss.  Indeed, I felt I was obliged to skip it because I was scheduled to teach the Immunology part of my Human Physiology course at the same time.  But when I got to work yesterday morning I was more or less ordered by my HoD to bring my class to hear the visiting speaker. We so rarely get to hear people from outside, that I should have had the courage of my convictions and cancelled class to go: you can quickly have enough of Immunology lectures.  Anyway, like The State Pathologist, the Gardai and the Governor of Mountjoy gaol, the lunchtime talk was worth crossing the atrium for.  It was, however, a bit of a gallop and I'd neglected to bring my note-book so I'll not be able to recall half of what was said. He started with a polemic saying effectively that the Health Service Executive HSE should be renamed the Illness SE, because preventive medicine and health promotion forms a vanishing small part of the HSE's ambit. There were further interesting snippets of arresting information.

70% of the Irish health care budget is spent on cardio-vascular disease (CVD), diabetes, some cancers and of course obesity which could be all but eliminated if the plain people of Ireland engaged in a modest regime of muscular activity.  Cost to exchequer = nil; savings = ?$4bn? each year. (the government allocates €13bn a year to health - about a quarter of what's available). Moyna pointed out that you don't have to pour yoyrself into shorts and a coloured shirt to exercise.  Digging the garden, painting the bedroom, even ironing the old man's shirts will all serve to burn some calories. The deal seems to be that if you keep the shear-force of the blood coursing through your veins slightly above baseline, then the linings of the vessels maintain their sleek structural integrity.  If the blood gets sluggish for as little as 3 days, then these vascular epithelial cells crinkle up and start to allow plaque to form.  So doing a marathon walk through Spain once a decade is not what is called for.

One of the best things about Moyna's talk was to hear him exhorting our students to critically evaluate whatever the current dogma is. Fashions in medicine and in sport come and go and despite some passionate advocacy the current truth universally acknowledged is sure to be replaced with some other certainty within their own lifetimes. He also spent a small amount of time asking them to follow the evidence rather than their instincts. Nevertheless, his analysis of two alternative protocols for increasing the fitness of GAA athletes, was insightful.  Since the foundation of the state, Fianna GAA have increased their stamina and fitness (ie beefing up the concentration of mitochondria in their cells) by a regime of Endurance Training ET which seems to amount to doing laps round the pitch every training session for 90 minutes. Moyna's research group has been evaluating a High Intensity HI alternative and comparing its effects to those of trad ET. HI training requires the athletes to run like buggery for a few minutes; pause to recover; repeat.  The elapsed time for equivalent cardio-vascular results is much less under HI than with ET.  But get this, the actual exercise time is still less (maybe 10% of jogging round and round), so I had this image of school-going sporty-types running like buggery; doing their geography home-work; repeat.  They'd soon knock off all the capital cities in South America.  I like very much that application of evidence-based research. 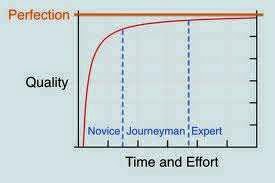 Here's another really useful concept to get across.  There is a diminishing return on your investment of time and energy in exercise.  It's easy to obtain some cardiovascular health benefit merely from getting off the couch and scything some nettles.  But spending twice as much time, doesn't get you twice the VO2max. You have to work insanely long hours (10,000 according to Malcolm Gladwell) to get to achieve hyper-fit mastery of your sport.  Never mind The Elite; I take from Moyna's talk the idea that if every boy and every girl in the country could be encouraged to run and jump and hew wood and fetch water a little, then we'd all be much richer even as multi-national Big Pharma got poorer.  It's really important recruit youngsters, because once you start accumulating flab, it is effectively impossible to permanently shed it.
Posted by BobTheScientist at 07:04