Pastrengo Rugiati? Never heard of him! Why is he in The Blob? Well, he's a famous sea captain.  More accurately, he is an infamous sea captain. I've written about another just recently who sank The Herald of Free Enterprise and killed nearly 200 people.  Captain Rugiati was put in charge of one of the first supertankers which were a cunning plan to transport very large amounts of oil from source to market or, in the (see left) Torrey Canyon's case, from crude-oil source in Kuwait to the refinery in Milford Haven in West Wales.  We cruise past the oil-refinery every time we take the car-ferry from Rosslare to Pembroke Dock.  It is a beautiful landfall coming from the open sea into the complex of sheltered bays that forms the Haven between a pair of rocky headlands and round some corners.  The ferry dock is right next to the old Royal Navy Dockyard, which was still in business up until 2008.  But the Torrey Canyon never made it to Milford . . .

She was the biggest tanker available at the time.  Too big to fit through the Suez Canal, she had gone all round Africa.  When she passed through the Canaries on 14th March 1967, after 25 days at sea, her owners told Captain Rugiati to deliver his cargo to Milford and get a move on because the tide was going to be sufficiently high on the at 2300hrs on 18th March.  Failure to meet this moon-deadline would necessitate a costly wait for another 5-6 days until conditions were again suitable. Capitalism's economies of scale are thus humbled by the natural world.

The next part of the story is one of normal accidents like Zeebrugge, Kegworth and Windscale. It is extraordinary that a ship just under 300m in length should have an autopilot, as if it could be left to its own devices while the crew went below decks for dinner or a film in the canteen.  Of course I am not suggesting that anything like that happened.  No, they left the ship's cook in charge on the bridge for the night while the Captain slept.  When the skipper woke at first light he found himself on the East side of the Scilly Isles although he was expecting to be on the West.  The autopilot could maintain speed and course but, in those pre-GPS days, it was not sophisticated enough to take account of a powerful current.  Other parts of the instrumentation were also poorly designed, so it was not obvious when the autopilot was ON, which would make the helm unresponsive to human intervention.   Like a Greek tragedy with its own inexorable momentum, as the crew tried to work out why the ship was not responding, the ship continued forward at full (30km/h) speed until the Officer of the Watch realised that they were in the middle of The Seven Stones Reef.  Calls of "Port your helm" and "Full speed astern" were far too late to achieve anything useful - there is an enormous amount of inertia in 100,000 tons of oil travelling at 30km/h and you can't stop it by applying the brakes.  kaRUNKKK!  The Torrey Canyon grounded on Pollard's Rock ripping the bottom out of the hull, and spilling thousands of tons of Kuwaiti Crude into sea.  The crew abandonned ship the following morning but, during an attempt to re-float the ship at the next high-tide an explosion killed one crew-member and injured four others.  The salvage companies gave up. 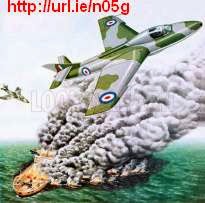 The British Government hadn't a clue about what to do and, as Pollard's Rock was then in International Waters, they didn't really have any jurisdiction. Nevertheless, first they tried a totally inappropriate detergent, conveniently produced by BP, the company that had chartered the ship.  Then they tried to set the whole thing alight with notNapalm ("wot, napalm? no guv'nor we don't 'ave any of that"), bombs, missiles and drums of aviation fuel.  It's a boy-thing and young pilots get so few chances to make big bangs in peacetime.  The русские (1967 was almost exactly the middle of the Cold War) looked on with some complacency to see the British planes miss this large sitting-duck unarmed target 25% of the time. I remember watching it nightly on the evening news for several days. A few years later an article with this illustration appeared in the educational kids weekly "Look and Learn".  L&L was by far the cheapest, but possibly the most effective, part of my very expensive education.  There's nothing like it available now with the possible exception of Aquila.

Torrey Canyon was the first monumental environmental disaster, so you can only really blame the decision-makers for what they did at the time if you have 20/20 hindsight.  Everyone learned something from the disaster and their response to it; every slick (and there have been at least ten biggies since) we learned a little more.

We may look back on it now as rather small potatoes as we chop down the last tree on Borneo.
Posted by BobTheScientist at 06:01