All the better to eat you

Folk- and fairy-tales are the bedrock of culture.  By telling these stories to the smallest people of our community, often by the oldest member, we transmit cultural norms and ethical positions.  They tie us to the past and help to ensure that we behave properly, or at least normally, in the future.  The structure of these tales is often ritualised: you must knock three times before the door opens; you must stay in the wilderness for 40 days or seven years; girls and boys behave in stereotypical ways.  Marina Warner famously published her analysis of these structures From the Beast to the Blonde in 1994.  It was an investigation of the meaning in fairy tales and showed that some of them reveal the darkest edges of our true selves.

The wonderful, eclectic PLOS-One has recently published a neat cross-disciplinary study on Little Red Riding Hood.  The data are firmly from the Arts Block - comparing variants of folk-tales from different parts of the world to see whether they have common elements and then to classify them on the basis of the extent of similarity. This is apparently a standard methodology.  Jamie Tehrani from Durham University has used a scientific technique (phylogenetic trees) to quantify the amount of similarity and display the data so that more similar tales are closer on the page: 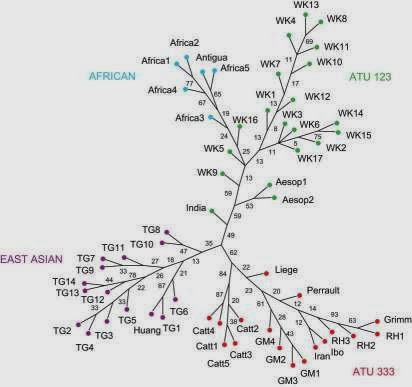 The diagram shows that there appear to be three clades (related by descent sub-sets) of stories. ATU 123 is "The Wolf and the Kids" while ATU 333 is "Little Red Riding Hood".  Tehrani's hypothesis is that the East Asian variant is not, as previously suggested, a primitive ancestral story from which LRRR and TW&TK are derived by divergence, but rather a more modern amalgam of the two older stories.  Evolutionist call that horizontal transfer and it's really important particularly in bacterial evolution whereby a pathogen can acquire a handy set of antibiotic resistance genes fully developed and already evolved by another totally unrelated species,  Pretty cool I think, although I'm not 100% convinced by the statistical arguments.

It reminded me of another analysis of tales by evolutionary science tools.  It's hard to credit that The phylogeny of The Canterbury Tales was published 16 years ago, because I can still remember the details and cite it often as an excellent example of a bridge between the Two Cultures of CP Snow.  It's also hard to credit that Chaucer wrote his tales down almost exactly 100 years before it was printed by William Caxton in 1478.  Before that manuscripts were just that - things that were written/copied by hand. What Barbrook, Howe, Blake & Robinson did for their short-but-sweet 1998 letter to Nature was to transcribe 850 lines of Chaucer's Wife of Bath's Tale from 58 medieval copies in The Canterbury Tales. They then aligned all the texts to highlight the accumulating differences as quill-pen copies were made of copies. That is a very powerful metaphor for what we think happens with DNA mutations.  The process of making an exact copy of DNA is very reliable: about 20 errors per person (or 3 billion base-pair genome) per generation.  Copying manuscripts is much less reliable and BHBR found numerous differences in their dataset. 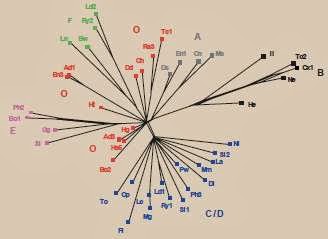 The arts-science cross-over added-value came from the fact that we evolutionary biologists have software for tracking and making sense of small changes in the sequence of letters, so BHBR were able to lash their mss into a computer and generate the pattern of relationships illustrated on the left. The key result from their analysis is that several manuscripts (marked O in red) appears to spring from the very centre of the tree, which we may suppose is the missing original in Chaucer's own fair hand.  "However, most of them have been ignored by scholars" as BHBR say.  Why is that?  Because the world of scholarship acquires its own dynamic.  Like the Talmud which evolved as a series of commentaries on commentaries on commentaries on the Holy Book, a large fraction of science develops by critiquing the work of other scientists rather than observing the natural world itself with fresh eyes.  It seems they have similar issues with self-referential vortices in The Arts.  Self-referential vortices sounds sciencey, no?  It means that academics have a tendency to spin round and round until the disappear up their own backsides.
Posted by BobTheScientist at 06:41