Although The Institute wound up its teaching term last Friday, there was still teaching to be done.  So I spent Monday and Tuesday up in The Smoke doing four sessions on molecular evolution for the almost new MSc in Immunology.  I've done similar courses before when I was supplying bioinformatic infrastructure to the plain people of Ireland back in the last century. It was on my feet for 5 hours on two consecutive days but at least I know now NOT to kneel on the floor when getting down to the level of a student working away at a computer. If you do this in your youth, you'll finish up with chippy's knee and barely able to walk long before the end of your working life.  I had primed the students (N=19) to come with a gene of interest to work on.  So the first day they discovered where and on which chromosome their gene was located but also where the equivalent gene in mouse could be found. They found out the size and some of the functional attributes of the protein that came from 'their' gene.  But before all that I gave them a pre-quiz: asking them questions to which they would more likely know the answer after they had completed my course than before. Q4: put these five biological entities in order of size
I was relieved that almost everyone got almost everything correctly ordered.  This is different from many students at The Institute who don't seem to care/grasp that a molecule (glucose, T-cell receptor) is smaller than a sub-cellular organelle (mitochondrion) which is smaller than a cell (T-cell for example) which is smaller than an organ (hypothalamus, adrenal gland, kidney). On the second day, I asked them to estimate the relative sizes (chekkittout!) of each of the 5 objects.  Sure now, a T-cell receptor is part of and so smaller than a T-cell; but how much smaller?  A little of the "that's easy" confidence drained away because nobody could confidently tell me about how big a cell is tsk! let alone tell me how big its TCR receptor is.  Probably only half of them could instanter recall the formula for calculating the surface area of a sphere from its diameter.  The ratio between the diameters of the T-cell and its receptor is 1:5000 or this . to a large beach-ball.

The other task I gave them on day I was to name the 20 amino acids that are produced by the "Universal" genetic code: this was an obvious task because there were 19+1=20 of us in the room. The quality of this student cohort is indicated by one of them briskly pulling me up on the "20 amino acids" because she knew that in some species in some circumstances the UGA 'stop' codon is induced to produce the 21st amino acid selenocysteine.  I opened a box of chocolates, threw down a couple of markers and said they could have a sweet IF they could write the three-letter code for any of the known protein amino-acids. The quality of this student cohort is indicated by one of them asking me about taurine which is (almost) an amino acid which led to a brief discussion about other amino acids (ornithine) that have key roles in biology but not in building proteins.  It was very brief because there was an unseemly scrum of students round the white board fighting for access to markers and chocolates.  The tide didn't go down until all the dupes had been removed and the last amino acid had been identified. The quality of this student cohort is indicated by the fact that they stuck at it until they had solved the problem to their own satisfaction - the chocolates were entirely incidental. 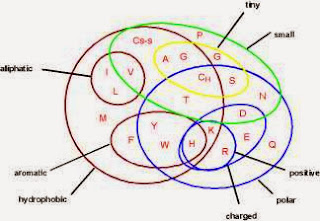 The next day, I gave them a bit of a harangue because it's one thing the know the name of 20 somethings but that's only useful if you know their attributes - which are big, which small, which basic, which hydrophobic.  If they remember nothing else from from the day, I hope that they will have internalised Willie Taylor's Venn diagram: it is key to making sense of protein sequence data.

These people, from all over the world but currently in Dublin, are hot.  If you senior guys in Kiev "Привіт колеги" are looking to hire bright, engaged, competent young scientists you'd better be putting a competitive package together: there are only 19 currently available.  If you young guys "Привіт прохолодні молоді люди" in Kiev are looking for a great taught Master's Program, I look forward to meeting you next year.
Posted by BobTheScientist at 07:50