More equality on the pitch 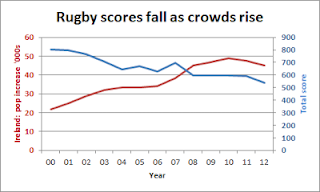 My first year ICT class delivered product on Friday - a 5 minute talk and a 2 page report - on something that interested each of them enough to make the effort.  I was delighted with the quality of the presentations and learned a lot. They were on such disparate topics, that I spent a chunk of the w/e following the intriguing leads they indicated.  One lad put together a compendium of records about the Rugby Six Nations Contest, which is conveniently finite in extent – 2000 was the first year Italy upgraded it from Five Nations.  So I was checking up on that, when I came across a summary of the points scored at each match, for each of the last 13 years  . . . and a total for each year.  These data seem to indicate that the average score in a rugger match is plunging.  One of the other mini-projects was about world population growth (inexorably upwards) so I thought I’d do a mashup of these two trends.  I couldn’t easily find an annual estimate of world population, but did find (www.cso.ie) a surrogate in the annual increase in the population of Ireland, which is conveniently similar in size to the audience/congregation at a rugby match in Lansdowne Road.

The idea that one effect might cause the other is a joke.  Nobody I know – and I’ve asked the only person I know who has played rugger in the last decade -  has a convincing explanation for why the competition in rugger should be getting tighter.  Indeed if that’s what the numbers indicate.  So I invite comments, especially from people who know a hooker from a handsaw.
Posted by BobTheScientist at 21:44