There's been a bit of traffic recently about Chuck Feeney, an Irish-American entrepreneur who made an $8billion fortune from the duty-free trade . . . and gave it all away. I may come back to that, but the give-back story made me reflect on Andrew Carnegie who was the Jeff Bezos of his day: ruthlessly exploiting workers to enrich shareholders [incl himself]. Carnegie spent his declining years endowing libraries in the USA and Ireland and elsewhere. Jessamyn West, librarian and Metafilterian from Vermont has just put manners on a website documenting all the Carnegie Libraries in New England. That sent me whooshing down a madeleine-scented rabbit-hole to 1982. 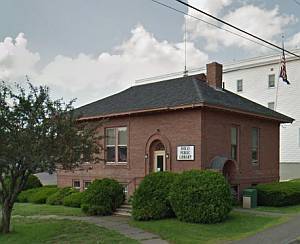 In June of that year we made a weekend trip from Boston to the town of Milo, slap-dab in the centre of Maine . . . for the sole reason that, 6½ years previous, we had attached that handle to The Boy. We wandered around town taking photos of the chap in front of "his" Fire Station, his Hardware, his Library [L], his town limits etc etc etc.  Apart from the fishing, it was the most tourist attention the town received that year. The building has the look&feel of a Carnegie Library and indeed it's on the list. It was one of the very few such trips we made out into the New England countryside, and we left the US the following year.

From Boston we had 7 years in Newcastle-upon-Tyne and returned to Ireland in 1990 with a teenager having left with a toddler. In those pre-internet days, The Boy was mighty in the world of Dungeons and Dragons but it was hard to find people to play with where we lived in rural chill out near the airport. In the background of this dilemma, we had house-guests who were looking to return to Ireland. The draughty rambling farmhouse which we lived in was . . . rambling to the extent of 5 bedrooms upstairs, so there was plenty of room for a couple of wanderers. Long before we'd got tired of Kevin and Lesley, they went all independent on us and rented a small flat in Dun Laoghaire. We went to visit a couple of times and, because it was there, paused at the fruit and veg outlet at the bottom of our lane to bring some fresh greens and a sack of potatoes to the city-dwellers. It was more of a joke than anything else: instead of a brack or a packet of biscuits, like. Years later, after Kevin died, Lesley told us that our random sack of kindness spuds was the difference between feast and going to bed hungry in the financial knife-edge they were living. Sadly, they couldn't make Doldrum Ireland work and they left for better fortune in British Columbia.

Mais revenons nous à nos biblioteques! It transpired that, every Tuesday evening, a D&D coven assembled in the dungeons of Carnegie Free Library in Dun Laoghaire. The Boy really wanted to go, I really really didn't want to collect him in the car at 2200hrs. But Kevin and Lesley offered their couch to crash on after the boy had finished slaughtering goblins and promised to fire him out the door early enough on Wednesday for him to catch the DART to school. The Boy got to play D&D but more importantly he got to develop a relationship with two wonderful and inspiring adults who weren't his parents. It was an important step in his journey to become his true self.