It's a washing-up bowl! Where I "do the wup". People have been washing dishes since we moved on from dobbing out portions onto banana leaves. If you don't clean the dishes, the dog will; and absent a dog the plates will get crufty, crusty and thicker than they need to be. I grew up in a three sib home so the tasks were: Alice to clear; Bob to wash; Cecil to dry; Alice to put away. If my Sailor Dad was present andif it was Sunday, he would wash the dishes. We, his minions would pass the obvious dish-wash failures behind his back for another go-thtough; so as not to hurt his feelings. You will notice that there was no Derek to rinse so that didn't get done. Not rinsing the dishes was/is really common in England and it's kinda gross to my present sensibilities. I didn't learn about rinsing until I went to the USA as a 20-something.
flatware = silverware = cutlery
china = crockery = delft = dishes 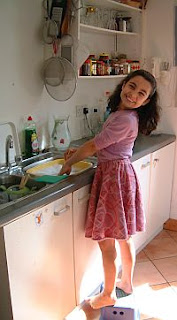 Ten years later, we were back in Ireland. The Beloved secured a training gig in Birmingham which required regular overnights in a Brummy B&B. She got pally with the owners, who shared that they had no tea towels. Because the Tourist Board decided that tea-towels were a potential fomite, to get their seal of approval, you had to show the inspector a dish-draining rack. Shortly thereafter I bought a robust triple decker plastic-dipped wire dish rack which screwed onto the wall over the draining board - feckin' bri'nt! You can see half the drip-tray of this machine behind the tap in the picture of Dau.I learning her craft in the last century [R].

One of the agreements nailed down very shortly after my parents married in 1950 was that the wup would never be left until the morning. I suspect that was a rather one-sided contract . . . except on Sundays, like.

Recently on Metafilter, someone tapped into the hive-mind to ask "What is the right way to hand wash dishes?"  This is my jam! It's like the answer to
Q Do you have a dishwasher?
A Yes, his name is Bob
Dishwashing machines are by no means universal in Ireland!  Anyway, here is my answer:

We live remote with a septic tank and drain field. Moi le plongeur is scrupulous about minimising fats and oils going down there. A neighbour had to dig up his drive and the pipework to deal with their fatberg. Two sheets of TP will absorb a lot and make good firelighters after. We have a double sink.

If we have company, and more dishes, I stop when the drainer is full and have another session later.

Never, no matter how drunk, leave the dishes till morning

On dit que handwashing dishes consumes that amount of water while a dishwashing machine uses only 5 gallons = 20 lt. According to the MeFi discussion there are people who rinse dishes under a tap running cleaned drinking water straight to the septic system. For them favelas / townships / barrios are something you see on the National Geographic channel.