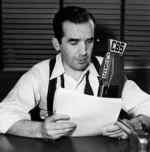 G'day, did you wake up this morning? Ed Murrow was born on 25th April 1908, smoked a helluva lot of Camels and died of lung-cancer on 27th April 1965, aged 57. Reporting for CBS from London through the Blitz he adopted the sign off Good night and good luck from fellow Londoners who had no certainty to being there in the morning. In October 1958 he spoke to media moguls, pointing out "Evidence of decadence, escapism and insulation from the realities of the world in which we live, we are currently wealthy, fat, comfortable and complacent . . ." in the corporate structure of Media America whose sponsors prevented criticism or speaking the truth to power, which is a contemporary Quaker phrase for épater la bourgeoisie. Almost more important than censorship is self-censorship, where we are too nice and careful of what we say.  Indeed there is a strong and heroic history of publication under a regime of censorship which has brought out the very best in people both readers and writers. As an accomplished broadcaster heading a team of writers, researchers and producers, Murrow was often good for a quote:

The decade after WWII saw the chilling effects of the Cold War where mutual distrust and willful misunderstanding between two ideologies and two super-powers almost brought the human race to an end and caused numerous excess deaths in proxy wars around the world. There was a collective denial of FD Roosevelt's dictum "We have nothing to fear but fear itself" and paranoia went on the war-path. Not content with demonizing the Soviets, everyone was encouraged to smoke out their neighbours as 'communiss'. If you were so fingered and worked in Hollywood or large swathes of the media, then that was likely to be the end of your career. The highest profile scum that rose to the top of this seething mess was Senator Joseph McCarthy of Wisconsin who took to making wild but unsubstantiated claims about communist infiltration in the army, the State Department and other central pillars of the establishment.  Although often conflated in the fuzzy lens of history, McCarthy was not and never had been a member of the communist party HUAC - the House Unamerican Activities Committee [prev]. It wasn't only film actors and writers who got on the wrong side of  HUAC and McCarthy: Linus Pauling, double Nobel Prize winner, had his US passport seized so that he couldn't go to Europe for meetings, scientific or otherwise. Robert Oppenheimer leader of the Manhattan Project which won the war for America, he was also stripped of his security clearance in 1954 because he was left of centre. If these grands fromages could have their lives screwed over the anti-communist jackals, it made ordinary people more inclined to shut up and keep a low profile. Really famous people could consider an up-stakes and going to live in Europe, if you had a government job and kids in school you wouldn't advertise the fact that you enjoyed the works of Dostoyevsky. Oh and did I mention that McCarthy had the stiletto out for homosexuals as well as Communists?

Ed Murrow had huge street-cred and trustability. Nevertheless, it took a certain level of courage-of-conviction to take a set against the prevailing winds of US politics. He finally had enough of the witch-hunting and decided that he'd expose the Junior Senator from Wisconsin as a shallow, gross, vengeful ignoramus. Murrow quietly indicts McCarthy on the TV. After McCarthy has been given 30 minutes of air time to give balance [it's on youtube but I'm not going to make it easy for you to find], Ed Murrow wrapped up the case and threw it in the bin.


You may if you choose see how this piece reads
replacing every instance of communist with Muslim.
Posted by BobTheScientist at 07:16