For as long as I can remember, I've gone down to the sea-shore to scavenge. The idea of sitting on the beach soaking up the rays is a) only possible to achieve twice a year in Ireland b) causes melanoma so I don't do that.  In England, when we lived there, it was wooden fish-boxes and rope.  In Ireland, because things have moved on, it's plastic fish-boxes and rope . . . and buoys. We live a long way from the sea, so I tend re-purpose the buoys as Art. The Beloved and I spent pretty much the whole of last weekend down on the incomparable Waterford Coast. The weather was a blessing: dry enough to mow the lawn, warm enough to leave a coat behind and sunny enough to need a hat. Over a couple of days, I scoured the beaches between Stadbally and Annestown: Ballyvolane, Ballydwan, Templeverick, Knockmahon, Kilmurrin, Benvoy and Woodstown / Whitefield. No not the Woodstown, famous for its oyster farm and for having hosted Jacqueline Kennedy while her husband was on his Presidential visit to Ireland in 1963. There are four townlands called Woodstown in Co. Waterford.

It's been pretty calm at sea the last month, so there wasn't a lot to be found. But it was super-wonderful to be out in the fresh air, in the sun and have all day to spend loafing.  For many of these beaches you don't ever get all day because they are only accessible at low-tide . . . unless you have a canoe. 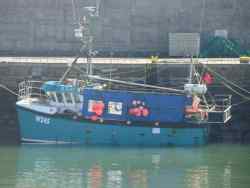 We are currently collecting sea-scoured drift-wood for another Art project which doesn't involve buoys but I can't leave buoys all lonely on the beach when they can meet lots of new buoy-friends in our orchard. Eeee, I were delighted to see a pink blob in the distance when I came round the headland from Annestown to Woodstown. It turned out to be a large buoy, such as used by lobstermen to tag the end of a string of pots. It also had JUEAST W245 printed in big letters on the side. When we got home to a nice cup of tea, I googled up the information that Jueast is:11 m long; 11.5 t gross tonnage; and her home port is Dunmore East. There are even pictures of the ship [R].  After talking large last month about how I would return a fish-box if the owner was nearby, I could hardly keep this buoy. Before we packed up to head home on Sunday afternoon, I snt a txt to the Harbourmaster at Dunmore East asking if the Jueast was in port because I had something to return to them.

Being a Sunday, I didn't expect a reply and headed in towards Dunmore aNNyway.  It's more than 20 years since I was in Dunmore which is still one of Ireland's most attractive villages. My grandfather was harbour-master there from 1922-1947 and my father learned to sail out of that little port. Neatly, the Jueast was indeed in port, tied up to the quayside and unloading boxes of crabs. They were expecting me, because the ever-wakeful harbour-master had forw my txt-msg. They knew exactly where and when they'd lost their buoy, were delighted to have it back and curious to know where I'd found it.  Then they went back to work and I went to find another cup of tea in the locality. Good day's work.
Posted by BobTheScientist at 06:56