If you've been delivered here by Google in your search for a hot date with a sasquatch, may I respectfully send you on your way. There is nothing of that sort to see here. But there is something rather interesting which popped up out of Research Methods class over the last couple of weeks.  As Quantitative Methods = QM is what The Institute calls remedial maths, so Research Methods is beginning statistics and data-crunching. It is taught in two parallel streams: a) a series of lectures about the theory and probably a few worked examples b) a 2 hour session each week where students can get down and dirty with some data.

What data? Why not real data? Why not real data about or from the punters? This year I have two ResMet classes full of 2nd Year sporty people [working towards degrees like Strength & Conditioning or Sports Rehab] and I asked them to record a) their shoe-size and b) their height in cm. These are the same people with whom we investigated reaction times and body-proportions in 1st Year 12 month ago. They are used to me foibles. In my round-the-house Intro to the exercise, I gave them some life-coach advice. When I was born, girls wore dresses and pink and had long hair, while boys wore blue trousers and a buzz-cut. By the time I'd grown up these demarcations were considerably blurred. I floated the idea that if a young person wished to check out a long-haired creature walking down the street in jeans, then the key was in the feet, rather than at the other end of the jeans. Teen and adult boys just have bigger feet, I asserted. We were also gathering real data so that we could test a hypothesis such as "Women are shorter than men" - [with an unmatched t-test or a Mann-Whitney U test] or "Str&Condit attracts more men that SportsRehab" [using Chi.Sq].  But if we have two sorts of related data it is possible to make a scatter-plot to see how they are related: 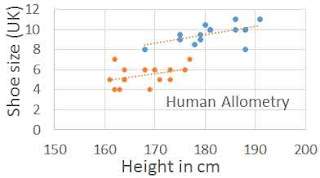 If you ignore sex M/F, you can see that there is a rather strong trend: Tall people have big feet and vice-versa. There's a lot of scatter, though, which is the variety among humans that makes life so interesting. Nor can we exclude the possibility that someone has made a mistake converting 5ft10in into cm. When you take sex into account something much more interesting turns up. Although the smallest man is shorter than half the women; no man has smaller feet than any woman. Within M or F, the height = foot-size trend is still there [I've dishonestly added a "trend-line" to sex up the effect] but the line for girls is parallel to, and lower than, the trend among boys. I was delighted to see my off-the-cuff assertion so clearly borne out by the data. 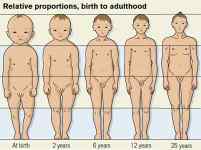 The title I've stuck on the diagram is Human Allometry, which is relevant here. Allometry is differential growth rates and the concept is pervasive in the living world. I showed last year that a human skull is essentially the same as a baboon skull, except that it retains features more typical of a child: we are neotenous.  As we grow, some things grow faster/bigger than others. At birth we are about 4 skulls long but as adults the relative height is about 7.5 skulls. For reasons which are not clear, men's feet have a different, cranked-up sensitivity to human growth hormone.

I was sharing these ruminations with one of my colleagues, who said she knew all that already because she bought shoes for both herself and her sons (that's weird - they can vote but they can't buy their own shoes?). She then went on to say that she has spent a life time shopping for shoes in sales in Galway and Dublin. She could never find [ladies] shoes in size 7 in Galway or size 4 in Dublin. Seemingly the country people in The West have bigger feet than the sophisticates of Dublin on the other side of the country. We know, from George Dawson's massive study, that there are differences in the ABO blood group frequencies [last week] between East and West. Now it appears that they are built differently too.
Posted by BobTheScientist at 06:36