There is a tradition in the building trade to celebrate the installation of the top-most structural timber with a small ceremony called Topping Off or Topping Out. Old timers in many N European regions will tie a small tree to the chimney stack to propitiate the displaced spirits of place. It is common for the householder to buy a crate of beer for the workers to encourage them to finish the rest of the contract. About half the cost of a new build is the water-proof structure. Fitting the shell out with electricity, plumbing, heating; plastering and painting the walls; putting the final bits of floor down; getting the interior ceilings up, plastered and painted takes the other half. Anyone who has suffered through a building project will remember a Snag List as long as your arm: this is the discrepancy between what the builder has signed off on and what the customer thinks s/he can live with: electric sockets slightly skew; a small drip from the toilet cistern; a really terrible bit of skirting board in the second bedroom; a widening gap between the wall and the window-frame.

For our topping out 19 years ago, we invited the wives and girl-friends of all the contractors to a party with their blokes so that the men could show-off their skills. We figured that if we were real nice to the ladies, that would add a push to get the work finished. As well as a sapling on the chimney we installed small gorse bushes Ulex europaeus in both toilets because a) they weren't plumbed in yet [tsk!] b) they were in gorgeous bright yellow flower c) they smell of coconut.

Our timber shed obviously needed a roof after all the vertical and horizontal structure was installed. We were advised by the chippy that a lattice of 2x4s = 50x100mm with bird's-mouth notches attached to the wall plate crossed by 2x3s = 50x75mm would be strong enough to carry 9 sheets of corrugated steel (and a foot of snow = 1 tonne). Needless to say every visitor to the site with a Y chromosome 'helpfully' told us that was far too much timber; that corrugated steel effectively supported itself; and that we had been gypped about the price paid. These same people were also happy to sound off about the orientation of the shed - why not build it facing East? with steel up-rights? with concrete footings? with the roof at the bottom? ANNyway we went with the chippy, whose parting shot was advising us to sandwich a layer of roofing felt between the 2x4s and the 2x3s "unless you prefer to be dripped on from above?". These structural timbers were meant to be on 3ft = 900mm centres but because of an inventory cock-up [oops] they finished up 1100mm apart - and still looked over-engineered to the know-alls. From the last shed we re-roofed 9 years ago, we had a bucket of 75mm roofing nails, and I dearly wanted to use them up toenailing the timbers together. But it was easier and stronger to use the same 5,0x100mm screws which we'd used to attach the horizontal wall timbers to the telephone poles. 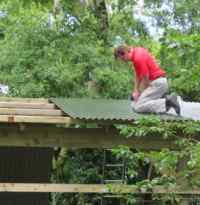 One of our kinder neighbours is a recently retired roofer [R - at work] who offered us an hour of his golf-time on Saturday to get the first sheet of corrugated steel up "properly - once you have the first sheet up, the rest fall into place".  That first sheet brought home to us that the building is not quite square. If you put the sheet's long-edge against the end of the 2x3 supports and sighted along the short edge, you could see that there would be no overhang at the far end of the building. Accordingly we aligned the short edge and trimmed off the 2x3s so they looked correct. Having screwed in the first sheet, our resident roofer stayed up there and made Young Bolivar and me pass up the next sheets one-by-one while he tacked them in place with hex-head self-tapping roof-screws. Wup wup wup and up they went.  It took about an hour before he deemed the rest of the task to be within our competence and he sailed off to the golf driving-range. Just having the extra pair of hands was useful - those 12ft sheets of corrugated are not so much heavy as awkward and sharp at the corners. Roofer warned us not to leave the sheets partially secured! The next gale would happily peel them off the roof and leave them 2 fields away in a mangled heap. Young Bolivar spent another hour tiptoeing about the roof putting another 100 roof screws in; while I sank back exhausted and called for tea.
Posted by BobTheScientist at 06:27