One of the rites of passage that I flunked happened when I was a spotty youth newly enrolled as an undergraduate student in TCD. A friend of mine invited me to spend Hallowe'en weekend at her family's dacha on the Kerry coast. On the Saturday lunchtime a dozen+ of us went off to a minute bar/grocery some distance away. Someone asked if what I was dhinking and I said Guinness because that's what all the men were at and a couple of minutes later a pint of plain was on the wooden counter in front of me. I sipped this delicately - it was different size and colour from Campari & soda but had some of the same repellent properties. I was making progress when another pint was put beside the first, and before I'd started that another pint appeared. In the end there were four pints of the black stuff with my name on it. Naive as I was I knew enough not to feel obliged to slug them all down. At one point (things were getting a little hazy, I wasn't used to drink) a car pulled up outside and a chap brought in a wet sack of oysters weighing perhaps 5kg and presented them to the party as a gift of the sea. I bottled out of the oysters as well although they seemed to go down other throats with easy familiarity if lubricated with Guinness.

Point is, we didn't grow up with eating invertebrates. Fish we did eat but it was usually covered in ‘breadcrumbs’ the bright orange&yellow wholly artificial coarse sand that was/is sold in a cardboard packet. I loved plaice’n’chips and fish fingers which in those days were little oblong fillets of cod. Now, of course, fish fingers are made from the bits that can’t be sold in recognisable cuts: fins, skins, offcuts and sweepings turned into a paste and held together with fish-bone glue. I was (and am) really unadventurous when eating out – plaice & chips & peas if it was on the menu, which was almost always. Years later, when I was briefly a European apparatchik and often in Brussels, I’d always order mussels (and frites/friet!) out of respect to the Belgian national dish. I wouldn’t buy mussels to eat at home, but I’ll scarf them down if they are put in front of me. I’m not ready for oysters yet, though.

I guess we should eat fish when / while we can get it because we have collectively f**ked over the oceans in a rapacious and wasteful looting of the sea’s riches. It amazes me that you can buy cod and haddock for less than €10/kg and I’ll eat it at that price. I feel guilty rather than delighted at these bargains because it tells me that someone in the food chain is being exploited. A good friend and good blogger grew up in Cheekpoint, County Waterford thinking he’d be a fisherman all his life. But his whole community was washed up on the beach as surplus to requirements in 2003 when the few remaining salmon were declared off-limits. 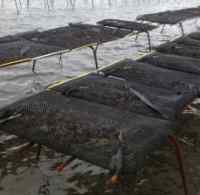 I was reflecting on all this because of an article sent to me by The Boy about Bren Smith a Canadian fellow who thought he was destined to hunt fish all his living days. But as he grew from boy to man, the fish were harder to find and the boats had to go further to catch enough to make a living. And they dumped tons and tons of ‘by-catch’ because their market value was too low. Their nutritional value was omega-3 super but to the fishermen and the fishing industry it was just clutter. He left Canada for The Warm(er) South and started an oyster farm in Long Island Sound [L oysters growing in 500x1000mm plastic mesh bags on raised stands to ensure full water circulation at high tide]. Oyster farming, like all sea-labour, is brutal hard work: the bags need turning and shaking, they are salty and covered with sharp barnacles which cut the hands open. Successive Hurricanes Irene and Sandy dumped tons of stirred silt over his horizontal salt-water farm destroying or burying his hardware and suffocating the stock - he was bust . . . but not broken. 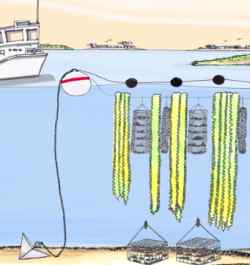 Smith learned that hugging the sea-bottom was vulnerable and took uop a lot of space while an oyster monoculture put all his eggs in the one basket. His next venture went vertical and diverse [R growing scallops, and clams as well as seaweeds and hanging the whole thing from floats - the cages on the bottom are full of oysters and crabs]. He is thus making a product out of the intrusive sea weed; the watch word is kelp is the new kale. Seems that kelp is highly efficient a sequestering carbon [mitigating the old carbon footprint], but also locks up nitrogen [turning agri-nitrate run-off into an asset for his farm rather than an ecological disaster]. He is trying hard to persuade super-trendy NYC chefs to incorporate his seaweeds into their Nouvelle Cuisine assiettes presque vides. But the fall-back plan is to ship kelp ashore as a nitrogen-, phosphate- and mineral-rich fertiliser for suburban truck-farms and market gardens. If the fertiliser demand dries up, the kelp's carbon can be fermented into biofuel to heat homes and drive cars. He's recently won a $100,000 sustainablity prize for is 3D farm vision.

The statistics are impressive: on an up-and-running inshore 3D farm they can grow 25 tonnes of greens and 250,000 mixed shellfish to the acre [=0.4 ha.]. That scales up to calculate that an area the size of Washington State - 185,000sq.km - has the capacity to feed all 7.5 billion of us. You'd be hard put to get 20 tonnes of anything edible out of an acre of soil, and that would only be made possible by lurrying on tons of NPK fertiliser at vast expanse. You can't in any sensible way add fertiliser to these 3D farms: it will just wash away on the next tide, but the ocean is wide and rich and seaweeds and shellfish are the most efficient things we know to concentrate the good things the ocean brings. Smith's philosophy is that his 3D farm at Thimble Island Oyster Co. is not exclusive. He welcomes 150 species of fish; seals; recreational visitors and all the nitrate running off the land.

Posted by BobTheScientist at 08:05