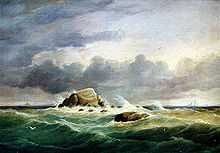 What's he on about today? Daffyd y garreg wen? Ditto in tenor key with 78rpm crackles?  Nope it's nothing to do with David/Daffyd; it's the White Rock / Pedra Branca a speck [2.5 ha] of shit-covered granite [R in a 19thC painting] in the middle of the ocean 46km East of Changi Point, Singapore but quite a bit nearer to, and equidistant [14km] from, the Malaysian mainland to the North and the Indonesian island on Bintan to the South. Plonked right in the middle of the seaway between the port of Singapore and the riches of China, Pedra Branca was a clear hazard to shipping, as were two other nearby features - Middle Rocks and South Ledge - that rose above the waves, at least at low tide. A dozen vessels piled up on the rocks in the first half of the 19thC alone. 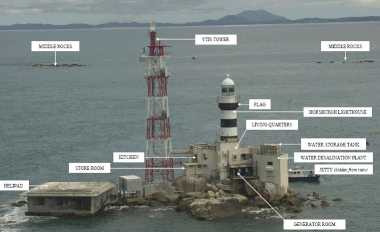 Accordingly, a lighthouse was authorized to be built on Pedra Branca by the British East India Company, and several years later this came to pass in late 1851 when the Horsburgh Light was finally switched on. The eponymous James Horsburgh was a much respected hydrographer and cartographer who had died 15 years earlier.  Nobody objected at the time to setting up this manifestly useful edifice and it continues to serve the sailing community to this day. The original spare elegant Victorian tower has since been surrounded by a clatter of hideous concrete and steel constructions [L the two low lying reefs in the middle distance are the Middle Rocks. In historical times, the region has been quite noisy, politically. "Pedra Branca" is Portuguese although it and the surrounding territory were claimed by a succession of Sultans with fairy-tale appearances by warring brothers and ancient treaties. The Portuguese were drubbed out of most of their claims in the region, except East Timor and Macau, by the more ruthlessly efficient enterprises from the Protestant nations of Britain and the Netherlands. After WWII, the Netherlands East Indies became Indonesia; while territory North of the Straits of Malacca were divested by the Brits to become Malaya and Singapore. There was a tentative short-lived union between the two which fell apart amid tears and recriminations, and a couple of bloody race-riots, in 1965 when Singapore was forced to go it alone.  As the great maritime entrepôt for the area, The Horsburgh Light became the responsibility of Singapore until 1979 when a Malaysian government quango published a map indicating that Pedra Branca fell within its territorial waters.  As I say above, being halfway to Indonesia, everyone wanted clarity on that issue.

It might have been a typo, or it might have been the first shot in a diplomatic war to re-jig the de facto sovereignty of the area. Singaporean diplomats requested-and-required their Malaysian oppos to cease-and-desist and publish a correct map showing clearly that Singapore wanted to pay all the oil bills for running the lighthouse.  It only took 28 years for the case to be resolved in Singapore's favour by the International Court of Justice on 23rd May 2008. A couple of football teams of well-paid lawyers and historians fed their children and sent them to fee-paying school off the process for half a working life. Singapore's case was that the islet was terra nullius when 'they' built the lighthouse. We've met terra nullius before in the desert with a fairy-tale princess. Malaysia wheeled out a lot of weasley lawyers, who blew the dust off ancient correspondence to claim the micro-archipelago in the name of the Sultan of Johor.  The wider case was resolved in Malaysia favour insofar as the unbuilt-upon MIddle Rocks were allocated to them - despite being on the further side [to the South] of the ever-so-slightly larger Pedra Branca.  So there was a prize for everyone in the audience!  Two countries throwing shapes over ownership of two worthless specks in need of a lighthouse might remind you of As Ilhas Selvagens midway between Madeira and the Canaries.  Or indeed, Snipe Island, a fragment at the End of the World which almost brought Chile and Argentina to war in 1958. Pedra Branca Dispute for the registered blind or car-drivers [1 hr].

It wouldn't be the Third World if there wasn't a strong hint of chicanery.  In 2013, Datuk Mat Zain Ibrahim, the head of the CID in Kuala Lumpur, claimed that the Malaysian Attorney General, Tan Sri Abdul Gani Patail, had taken money to 'throw' the case in favour of Singapore. It's somehow heartening to realise that multi-million sweeteners aren't limited to FIFA and the IOC.  I look forward to hearing some Attorney General or Ambassador being accused of doping: that would prove that diplomacy, for all the titles pomp and protocol, is merely a sport like boxing or cycling.

More islands? There is a large Blobo-collection.
Posted by BobTheScientist at 05:41