Not me, I won't need a boat: my home is 230m above sea-level.  You flatlanders and coast-dwellers you need a boat or at least some attractive wellington boots. It's not really flatlanders that are going to feel the wet it's only those who live less than, say, 10m above sea level. 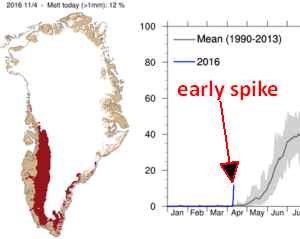 What am I talking about?  Data! From the Danish Meteorological Institute DMI which announced that a warm front pushing in against the Western glaciers of Greenland [red on right] has caused an anomalously early spike in melting ice.  The ice on Greenland accumulates during the Winter when it is dark and cold and snows a lot and then melts in the Summer when the sun raises itself above the horizon. For centuries there has been net gain, so the Northern Dome has ice up to 3km thick!  'Melts' is defined as being covered by more than 1mm of liquid water, so it might be dismissed as a mere surface phenomenon.  Nevertheless 12% of the ice was so covered on 11th April 2016, a full month earlier than this sort of melt-level has been achieved over the previous 25 years. Liquid water tends to run away downhill exposing the ice below to the sun's rays thus allowing a run-away melting. However much we might worry about melting Arctic ice-caps, most of that ice is already submerged, so melting won't result in a much sea-level rise.  Greenland OTOH is a massive island (although not so massive as the Mercator Projection distorts it), so all its ice is above the tide-line.  If it all melts it will raise the mean sea level by 6m and the additional water is going to accelerate coastal erosion in those places which are susceptible. Even if you now live 20m up, the sea may be at your front door before you sign on for the pension.  Everyone in Bangladesh should now start applying for visas to live elsewhere.

If the melt-water would just slip off the surface and start diluting the sea locally and/or covering it with a layer of fresher less dense water, then we'd only have a diverted North Atlantic Drift, brutal cold Winters in Ireland as I erroneously predicted last September for this last Winter. But what the water tends to do is run towards a local minimum and then plunge down a moulin to the base of the glacier where it acts as a lubricant to detach the glacier from the underlying bedrock - making the groaning grinding journey to the sea go incrementally faster. Be afraid, be very afraid - buy boat, buy big enough boat.  But what do I know?  My data-driven predictions of last September, about the end of the world as we know it a cold Irish Winter, were completely wrong. At least buy some wellington boots, though.
Posted by BobTheScientist at 06:58