A tuthree years ago, I reported on a nifty study using DNA molecular evidence to make convincing statements about the inter-relationships among elephants.  The conclusion was that there are two species of African elephant Loxodonta africana and now Loxodonta cyclotis which are as deeply separated from each other as Asian elephants Elephas maximus are from long since dead woolly mammoths Mammuthus primigenius. That was not totally unexpected, because some taxonomists had suggested such a division, but the depth of the divide was quite surprising because the two types look very much alike.  Molecular evidence can lump together as well as split, as we saw with penguin species where a trivial superficial difference between local races led people to designate two different species. But the DNA data showed that only one species should be designated - not least because the two types were inter-fertile.  For me the best story of molecules trumping morphology in determining relationships is Dan Graur and Des Higgins proof that whales were a subset of hippopotamuses.

I clearly have an appetite for this sort of thing and got another valuable earful last Friday when Dr Candace Scott came from St. Lawrence College, Kingston, Ontario to visit The Institute and gave us a talk about her work as a conservation biologist. She has worked with lions Panthera leo and hyaenas Hyaena brunnea, but the love of her scientific life are the rhinoceroses, especially those in Africa. As with two species of elephant that turned out to be three, when I was growing up any fule kno that there were two species of African rhino: black and white. We all knew that white rhinos weren't so colored - 'white' was a corruption of Dutch/Afrikaans wijd/wyd which referred to their shovel-like grazer 's upper lip. Black rhinos had a pokey-pointy upper lip more suitable for browsing foliage higher than the knees. Scott  has used the tools of molecular genetics to identify signature DNA variants which distinguish the African rhinos from each other and from their more distant cousins in Asia. Dramatis personnae: 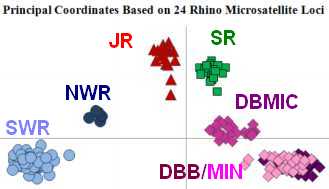 Candace Scott, has worked for many years in quite primitive conditions to obtain reproducible data that separates, or doesn't, the various sub-species [MSc thesis]. She is not the first person to attempt this work, but she found that previous studies yielded very noisy results: it was hard to assign an individual rhino to its morphological category (species/subspecies) based on the genetic markers the earlier scientists had developed. On the contrary, her discrimination is commendably crisp and shows [Above] two interesting findings.
These results haven't been without criticism. Very small sample of NWR, the pundits tsk, but those half dozen rhinos represent half of the remaining adult NWR still out in the bush. One could also question whether picking markers that best discriminate the existing sub-species is desirable. Take humans, if you pick eye and skin colour as your genetic markers then you can quite easily distinguish Norwegians from Nigerians but ABO blood groups or pretty much any other genes or combination of genes will be equally variable within each group and you'd have to conclude that the two types were interchangeable.  Why is this important? Because, with limited resources the WWF, or whatever conservation group has the loot,  has to allocate the money to saving this or that but cannot do both. The genetic data suggests that you can let either DBB or DBMIN go to  extinction-is-forever despite them being 'separate subspecies'. For whatever reason, rhinos don't seem to get much traction among the general public: giant pandas, elephants, killer whales, even wolves are considered more cuddly by potential conservation-patrons.

More women in science.
Posted by BobTheScientist at 07:01