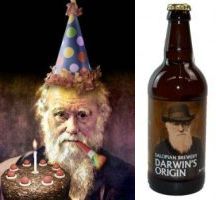 It's hishonour's birthday today.  As it was in 2015 - 2014 - 2013. Born in England on 12th February 1809 in Shrewsbury, Charles Darwin stood astride the 19thC of science.  So much of our understanding of the world was settled during his life time and he made many significant contributions himself. I can only find one event in Ireland.  I'm sure you can find something near you. Me, I have a single bottle of Darwin's Origin from the Salopian Brewery, which was given to me by Dau.I at Christmas. Salop is an alternative name for Shropshire from Salopesberia the Anglo-French name for the county town. I've been saving it for today and will be happy to share it with anyone who a) beats a path to my door and b) has a strange-but-true story to tell about Darwin.  I'm not alone in wanting to trib the Great Man. I have clipped a fwew of the many commemorative postage stamps that have been issued by countries other than the United Kingdom [Below: Moldova, Russia, Cuba / Italy, Equador, India]. You know, of course, that he shared a birthday with Abraham Lincoln, the 16th American President. 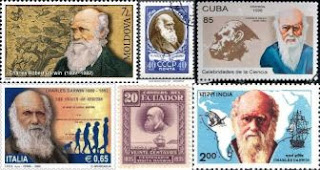