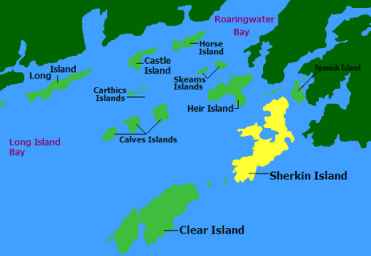 Sherkin, Inis Earcáin, [the island of the Fair (ie. golden) Head] is one of a clatter of islands striding out from Roaring water Bay in the far SW of Ireland. Baltimore, the ferry-port, is 2 hours of twisty roads West of Cork. If the trend of the islands in the map above looks like a drowned fractal version of the parallel WSW pointing fingers of land that make up the coast SW Ireland [R: they've only bothered to include Clear Island; the Southernmost inhabited part of the Republic.] then there are probably good geological reasons for that.  We had two nights on Sherkin at the beginning of the week as guests of Mike-the-Vet who runs a 'residential & cultural centre' called Sherkin North Shore.  It was the only time we could squeeze into a Summer busy with other commitments; but I'm right glad we made the effort.

The standard version of Bed & Breakfast is designed to give all guests their privacy.  The dining room is usually full of piffling little tables laden with plates and cutlery and condiments where couples talk to each other in whispers while sawing away at rashers and eggs and pretending their fellow guests are not there.  The best B&Bs a) serve yoghurt, muesli and fruit salad b) have a single dining table which requires butter and tea, toast and marmalade to be passed to neighbours.  If the latter situation holds then it turns out that the old chap is a retired embalmer from Chicago while the young couple with matching jumpers are triathletes who won a medal in Skopje in 2005.  In other words, far more interesting than discussing the itinerary for the day's rubber-necking with your partner. Sherkin North Shore is like that, in spades. Because only a certain type of traveller will take a passenger ferry to a sparsely inhabited island and walk 3km to the place they are staying.  That is a tiny exaggeration because there is a minibus supported by the government which will take you anywhere on the island for €2 a head; conveniently this service meets every ferry except at lunchtime.

There isn't a lot to do on Sherkin: no fair-ground rides; no cinemas; no candy-floss; no lettered rock.  just the sea, the fore-shore, a limited network of lanes connecting the extremities of the island and the cliffs, caves and beaches in between. With so little external entertainment you're better off if you are happy in your own skin.  It being the West of Ireland, you should also remain happy if that skin gets wet. Sitting in a chair above the rocks at North Shore, you can see the grey curtains of rain drifting in from the ocean, so you know you have 4.5 minutes to throw your book into the common room and help bring the sheets off the line.  But sure, if the sheets get an extra rinse, you know that the sun will be out again in 30 minutes.  If you pay attention in the evening you'll see seals Phoca vitulina bobbing about among the rocks waiting for mackerel or even an otter Lutra lutra weaving along the rocky shoreline. There's also plenty of bird-life to amuse twitchers.

Sherkin is famous for its Marine Station founded 40 years ago by Matt Murphy and still run by his family. Every Summer since then, they have enlisted volunteer help from the mainland and abroad to survey the life drifting through Roaringwater Bay, the foreshore and its hinterland.  Sherkin has a staggering number [N>500] of plant species recorded at least partly because of the attention given to it by these observant visitors: coming back from the pub in the evening, someone will stop to urinate in the ditch and see another plant not previously recorded. That long term record is the sort of thing Maude Delap was doing in Kerry 100 years ago but is desperately unfashionable now.  If you imagine that Matt Murphy is a a sort of Ed Ricketts from The Log from the Sea of Cortez, you wouldn't be far wrong but he's retired now and a bit fed up with uninformed and uninvited people rocking up to his door and expecting an effusive welcome and a cup of tea. You can get both from Sherkin North Shore about 400m East.  Sherkin is more widely known for the fat tabloid newsletter called Sherkin Comment, produced by the Marine Station on a quarterly basis.  When our girls were growing up we often picked up an issue or three from ENFO in the centre of Dublin.  The Comment is like a blog in print, a gallimaufry of information about science and the natural world.  I couldn't resist picking up a few back-issues from the "free take one" stack at the Islander's Rest Hotel where we went for lunch on Tuesday.

After lunch we walked the 5km to the far end of the island for a closer look at the storied heights of Clear Island. We found a rich stand of peppery water-cress Nasturtium officinale growing in a roadside drain along the way. At the end of a fuchsia-overgrown lane there was a little shingled beach between two headlands pointing West, I was disappointed in my search for buoys but I was happy to sit on a rock looking out to sea and not thinking - sometimes I sets and thinks and sometimes I jest sets - we're all better off to think less and sit in the quiet for as long as we can bear it. As long as you can bear it is how people treat swimming in the seas around Ireland. A friend of mine has just returned from Switzerland where he was swimming in the Upper Rhine just after it spilled out of the warming basin of Lake Constance and before the river is turned into an industrial sewer as it passes Basel: the water temperature was 22oC!  I took a because-it-was-there-and-so-was-I plunge into the sea at the Silver Strand nearer to Sherkin North Shore, it was bracing but a long way from murderous; with practice I could get to enjoy it.

32 other islands to visit.


Posted by BobTheScientist at 07:11