We live very remote near the middle of Ireland, so there isn't much excitement.  Last night I came home from Work, had a quick feed and drove off in the opposite direction to the ancient (Veisafjǫrðr was founded in 800CE by the Vikings) town of Wexford.  I had >!two!< science events to attend. 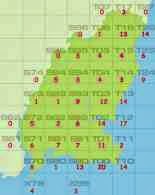 First off at 1845hrs was the launch in Wexford Library by the Wexford Naturalists' Field Club WNFC of their publication on the distribution of damselflies & dragonflies "The Odonata of County Wexford".  Notice how they correctly place the apostrophe [Naturalists'] in their name, they must care about the details.  This book is short on pages N =44, but rich in illustrations of the 23 species of Odonata that have been recorded in Co Wexford.  Each species has a distribution map showing where it is found in each of the 10km squares that comprise the county,  This is very much a people's science project, not funded with an enormous grant from Science Foundation Ireland, but driven by the enthusiasm of a handful of the members of the WNFC.  I was talking to the authors Nicholas Egan and Chris Wilson afterwards while getting my copy of the book signed.  It is particularly useful because it is a snap-shot of what we know now about the distribution of these beautiful insects.  So it serves as a bench mark against which to compare future sightings - or more depressingly likely, future non-sightings as some of the endangered species on the list become rarer to find and finally blip off the radar entirely.  The book will help me make a better call on identifying what I'm seeing when I next go walking the Barrow not entirely oblivious of the wild-life around me.  One of the most heartening things in the book is a full page, in small print, listing all the contributors of data from 1893 [first scientific record of Odonata in the county] until late 2014.  If you see a damselfly in a particular location at a particular time then write it down; it may be the only record of that species in that 10km square, or in the county, or in the country.  But you could also just reflect on how pretty they are and what evocative names they have been given by people paying attention: Ear Cutter, Hawker and Devil's Darning Needle.  But please, please, use the Latin name so that your colleagues in Hungary or Uzbekistan know what you are talking about.  The WNFC supplied a grand selection of home-made cakes and cookies to sweeten the event; thanks for that too.

After all that, I stepped out into the chilling evening to calm down and walk across town to the third meeting of the Wexford Science Cafe which convenes on the third Tuesday of every month in "Johnny's" aka The Sky and the Ground, South Main Street.  In February, four sciencekateers got together over a few drinks to see what could be done about the dominance of the Arts in the edutainment of the plain people of Wexford. The Wexford Opera Festival dominates the consciousness of the town to a quite Harry Potter degree - which needs an antidote or at least an alternative. We agreed then that we would take turns to present something [paper, movie, interesting rock, walrus baculum] once a month that would start things off so that we could talk about science.  In March, because it was uppermost in my mind [what with the Royal Society's 350 years and all] and whatever's there gets blurfed out in short order [The Blob], I led things off with a mad-eyed rant about Spandrels.  Incidentally here's the transcript of a recent interview with Dick Lewontin  about Spandrels and much more by David Sloan Wilson - not for the faint-hearted: it's not 'fluffy'. Last night The Gaffer announced that she would talk about immunology of the honey-bee Apis mellifera. This is really really important because of CCD colony collapse disorder which is devastating commercial bee hives across the US and elsewhere. Commercial bee-hives?  Could we not manage without industrial production cheap honey?  Maybe, but could we also manage without almonds, kiwifruit, melons, oilseed rape and a long list of other species that depend on bees for pollination? Well, it was a romp, from Jenner [and Jesty] and vaccination, through polio and HIV, to whole genome sequencing and immune gene discovery by computer.  We could have talked all night but eventually forced ourselves out into the now frankly freezing street and home.  All great fun, must do it again soon . . . and we will: 8pm Tuesday 19th May 2015, The Sky and the Ground, South Main Street, Wexford. All welcome!

They say that good things come in threes, and they did.  As I walked down the street towards the pub, I met Chris Hayes, tree-surgeon, broadcaster and and philosopher incommming from the other direction.  He professed to be Hank Marvin. I put on my best starving graduate student face [once you've been there, it never really leaves you . . . or it can be put on effectively] and he dragged me next door to the Premier chipper and bought us both a Wexford rissole. I've finally eaten a Wexford rissole!  Like sausages, you really don't want to enquire too closely about how these things are made but you haven't really lived until you've tried this fistful of food-groups [carbohydrate, fat, protein and much much more].