The Irish Times puts itself about as The Newspaper of Record . . . for the whole island. The Rebels might take this with a pinch of salt in Cork where they have their own newspaper The [Cork] Examiner which made the transition to national newspaper by dropping 'Cork' from the masthead with similar aspirations to that of The [Manchester] Guardian across the water. Likewise you might think that The North would find little of interest in the coverage in the Irish Times which can be embarrassingly parochial. Devoting a two page spread to a tutorial on how 18 y.o.s should act to have the best chance of passing Geography (or whatever) in their school Leaving Certificate may sell papers to anxious parents but hardly enhances the paper's facade of gravitas and (inter)national authority. The issue reporting the results of the worthy IT Cat Survey was filled up with small-small news items. WhoTF cares, for example, who wins the FAI Schools Senior Cup final between Coláiste Eanna, Rathfarnham and St Joe's Galway [CE won 4-3 on penalties after a 3-3 draw].  That's what you get in the local rag, not in a Newspaper of Record.  I still have a handful of notices clipped from the Irish Times for parts I played in amateur dramatics when at TCD in the 1970s "Bob Scientist was credible as the Second Student in Georg Büchner's Woyzeck" - note not incredible.  I care(d) about that and so does The First Student but nobody else gives-a-damn.

Now I have data to prick these pretensions and see just how far the writ of the IT runs.  You don't want to take this from the IT sales or circulation figures: solicitors' offices across the country may 'take' the Times to impress their clients but only use it to line the cat-litter tray at home.  Who said cat?  Wasn't he on about cats a couple of days ago?  He was, and indeed that is the source of my far-is-the-writ data.  The survey of cat coat colour launched by the IT in January was fired into the public domain last week with a slab of data which I have started to analyse. To respond to this survey you needed a) to have a cat or an interest in cats b) to take the Times or know someone who reads it and knows of your interest in cats. It seems that the intersection between those two sets is much larger [N=10,000] than those who give-a-damn about a soccer match between two high schools. One of the purposes of the survey was to get geographical data - a report of the county of provenance - and cross-reference that with the genetic information.  For the following analysis I'm going to ignore the genetics and report on the number of cats recorded in each county.  To establish a baseline rate, I've also gone to the CSO to get human population for each county.  Data incommmming!: 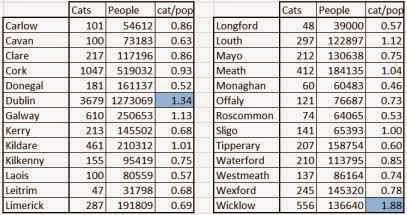 You can abstract from this that Dublin is grossly bigger in population than the other counties: 28% of the people squeeze into the second smallest county.  I've highlighted in blue(-shirt) the two highest points on the cat/pop column - Dublin and Wicklow - which have reported a disproportionately large number of cats. 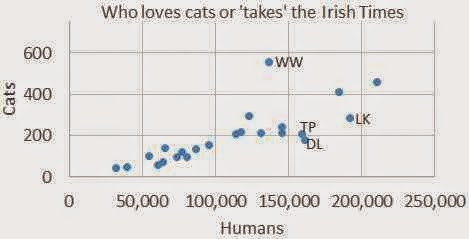 I don't accept that the people of Greater Dublin love cats more than us shit-kickers down the country, it is much more likely that more people read the Times in the capital than elsewhere.  Almost all the other counties are, in contrast to the folks of Lake Woebegone, below average; from a low of 0.46 in Monaghan to a handful of regions G, KE, LH, MH where the rate-of-return is just above the average. I think it's handy to graph the data [L. above] to show a) that there is a solid trend/correlation between human population and cats reported, b) it identifies just how much of an outlier Wicklow WW is. I put a lot of effort in The Institute to get more data for Co Carlow, but that had no discernible effect. I've trimmed the graph to exclude Dublin which is such an outlier that it would clump everything else in the bottom left-hand corner.  The graph also identifies the counties - Donegal, Tipperary and Limerick - which are most obviously below the line. Traditionally, the Irish Times is the paper of the Protestant Ascendancy and I think a case could be made that its writ runs out beyond the Pale but not very far. 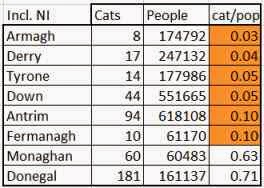 The clearest element of this analysis is that there is effectively no interest in the Irish Times north of the border.  The rate of cat reporting [i.e. Times readers] from the six counties of "Norn Iron" [data L] is down in the grass even compared to the well-below average shrubs on the landscape like Monaghan and Donegal. I've highlighted the  relevant data in orange but that's just a tease. I reckon the Irish Times is on a lose-lose in the North: the Protestants think it is run by a bunch of yahoos who seceded from the United Kingdom 100 years ago; while the Catholics know it is run by Protestants.

Posted by BobTheScientist at 06:59