The wild beast Henri Matisse was born on the last day of 1869.  His folks were comfortably middle-class and having qualified for the Law he was scheduled to work comfortably in the local courthouse right up against the Belgian Border. One of the ironies of life is that if you want to see some of Matisse's best work you'll have to trek into the boondocks of Northern France to visit the the  Musée Départemental Henri Matisse in his birthplace Le Cateau-Cambrésis. But Matisse kicked over his traces and went to be an artist, much to the chagrin not to say annoyance of his father.  He started his artistic career being comfortably middle class copying the masters in the Louvre, painting more of less representational still lives [R Still Life with Coffee-pot 1898] and landscapes and hanging out with other artists. In his mid-twenties he fell in with an Australian radical called Russell, who showed him that there was more to art than painting what a camera could do better and showed him works by van Gogh and other impressionists.  For Matisse it was his Road to Damascus and he started painting as if his subject matter spoke to him in the language of the gods. 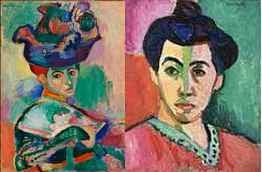 He left the earthly and lashed out wild coloured portraits which disconcerted pretty much everybody and really riled up the the middle-class conservative critics who had appointed themselves the arbiters of good taste. When the Woman with  a Hat was hung in the same room as a traditional sculpture, Louis Vauxcelles called the juxtaposition "Donatello parmi les fauves!" And like many other movements before and since, Matisse and his friends wore with pride the insult and have come down to us Les Fauves.  The painting on the right [L right 1905] is was catalogued as Portrait of Mme Matisse but has been long since known as The Green Line because of the weirdest feature of the picture.  The Woman with a Hat [L left 1905] also has a green nose but it's not just that which worried people.  Another critic Camille Mauclair called it a "pot de peinture jeté à la face du public". Which was not only rude but unoriginal because way back in 1877, Critic John Ruskin had  accused James Whistler of 'flinging a pot of paint in the public's face'.  The Woman with a Hat was nevertheless bought by wild lesbian expatriate patron of the arts Gertrude Stein which was good for Matisse's morale as well as his pocket. 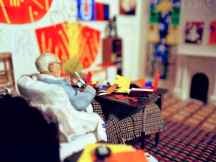 What I really like about Matisse is that he worked through a long life trying to capture the essence of what he saw or imagined, discarding mere details along the way.  In 1941, at the age of 72, he underwent abdominal surgery and spent a lot of the rest of his life in the bed wielding an enormous pair of scissors to cut out the basic shapes of his collages from coloured paper, a technique he called gouaches découpés.  He was looked after by one of his models Lydia Delektorskaya and developed a strong friendship with a nurse called Monique Bourgeois which continued after she metamorphosed into a nun Soeur Jacques-Marie.  Despite his atheism, in gratitude he undertook to design a chapel in Vence (5 min movie) including brilliantly optimistic stained glass windows as a counter-point to minimalist monochrome cartoons for the Stations of the Cross.  When asked if he believed in God, Matisse replied "Yes, when I work".  If we could all be as committed to what it is we do, there would be less unhappiness in the world. 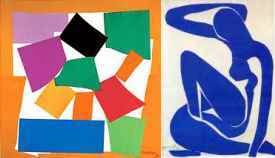 But I'll finish with two late works from his collage period.  [L L'escargot (snail) 1953; R Nu Bleu (blue nude) 1952].  The Beloved had a 1970s hippie poster of the Nu Bleu when we first met, which I didn't pretend to understand back then but it was always there in the background.  I've written before (I market women; II men and women; III screaming) about artists struggling to drill down to what really matters.  I think I chose the easier path when I went for a scientist.
Posted by BobTheScientist at 11:32