When I worked in St. Vincent's University Hospital after the turn of this century, I used to take my lunch ('umble sandwich, cup of tea) downstairs to a round table where everyone else ate, gossiped and talked about telly: Big Brother had just been launched and everyone except me seemed to care who said what to whom about whom in that artificial melting pot. Everyone there had been to college and about half of us were working towards a higher degree or had already achieved that dubious honour; they were 'educated'. One day, our bright young research associate turned to me and asked where I came from (. . . with that distinct middle-class-southern British accent by implication).  I fobbed her off (and everyone else with radar-swivelling ears by implication) with my standard cocktail-party story about us being horse-riding protestants from King's County in the Irish Midlands.  But she brought me up all standing by inviting me to "go back where you came from": England by implication.  I was dumbfounded; my family had a paper trail showing that they had been living in Ireland since 1634 - I bet she couldn't be so sure about where her people came from.

I knew a little about displacement and exile because I had spent the early part of the 1980s immersed in the history and genetics of New England and the Canadian Maritime Provinces.  My PhD had sought genetic evidence of migration patterns in that broad region and I travelled all over New Brunswick and Nova Scotia in search of data.  The Francophone part of this bailiwick was known as Acadia which was a corruption of an Idyllic fantasy place called Arcadia which was mentioned in Virgil's ecologues "Et in Arcadia, ego" as a place of plenty and happiness . . . where yet death (ego, in one interpretation) was inevitable. 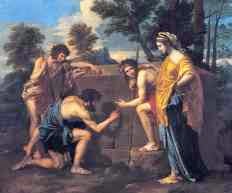 The phrase is most famously represented by Nicolas Poussin's didactic painting Les Bergers d'Arcadie [L for Louvre] in which three half-clad bucolic "shepherds" ponder the inscription on a tomb and Art explains that her works will transcend death. Deep? If you want deeper meaning you must read Holy Blood, Holy Grail which was ripped off by Dan Browne's Da Vinci Code and is a better book entirely.
In one of those weird language "coincidences" that would please my distant cousin Trevor, -acadie is a suffix in the language of the local Micmaqs which means place of abundance.  Acadia can date its origins back to the foundation of Port Royal on the South Shore of the Bay of Fundy, by the French in 1605.  They lived there minding their own idyllic business until they got caught up among the trampling feet of two geo-political elephants England and France who were crashing about in conflict for prestige and the cod fishery.  Acadia central (New Brunswick, Nova Scotia and Maine) was lost to the British at the Treaty of Utrecht in 1713, while the French retained Île Royale [Cape Breton] and Île Saint-Jean [Prince Edward Island] for another generation. Many of the Acadians left for these havens when-and-if they felt that their religion [RC] or their customs or their daughters or their livestock were in danger of being violated by the British local government. Among these emigrants was the patriarch Noël Doiron who had lived with his extensive extended family in Pisiquid further up on the South Shore of the Bay of Fundy.  He upped-stakes and brought his family to Île Saint-Jean in 1750 where they endured a succession of Little House on the Prairie hardships - locusts, famine, subsisting on shellfish.

In 1756, the summering tensions broke out again in the Seven Years War aka the French and Indian War and the French were trounced on all fronts: India, Caribbean, Europe, North America. London decided that the Catholic Francophone population was a source of support to French ambitions in the area and issued a diktat that these people would be rounded up and "repatriated" to a country which their ancestors had left 150 years before.  In late 1758 after the fall of the French bastion at Louisburg on Île Royale, the deportation order was signed and a fleet of thirteen transports appeared off the coast of Île Saint-Jean. Noël Doiron and his family were among 3000 Acadians embarked on the Duke William which finally set sail in convoy during a lull in the storms in late November. They had a rough crossing and after days at the pumps, on 13th December the ship foundered 20 leagues from France. There were three small boats aboard and Doiron, knowing that not everyone could be saved, told Captain William Nichols to save his crew in the two largest boats and allow the passengers to rather commend their souls to god.

Nichols agreed to this strange bargain (and why not?) and eventually made landfall in England. Noël Doiron [74] his aged wife, five sons, their wives and thirty grandchildren were among the 360 Acadians who perished on that one ship. Two other vessels in the original flotilla the Ruby and the Violet also went down with all hands in the storms. In all, only about 50% of the Acadian v'yageurs made it 'home' to a strange and alien France. I've written about other shipwrecks and the fate of women and children before.  Usually, these members of a ship's company have really poor chances of survival in the undignified scramble of an emergency; on the Duke William they met their fate holding hands. We may weep now.
Posted by BobTheScientist at 08:18