Nowadays, when you Google up just about aNNything, the top hit is from Wikipedia, unless it's about notable female Edwardian naturalists who are of no interest at all to Jimmy Wales's wikiboys. In my restless surfing of the interweb to find copy from The Blob I often pass through the en.wikipedia.org home page where there is a snippet-bin called Did you know  . . . which changes daily and is usually good for a ten second glance.  Items are often peripherally associated with some event on the given day. I was curious enough about this question Did you know that the stiff wood in Bronzino's portrait of Genoan admiral Andrea Doria (pictured) may represent an erection? . . . to find out more about the portrait (it's not very exciting in that sense).  From there I was reading about Admiral Andrea Doria the man; which rang a distant bell about Andrea Doria the liner which was sunk in a collision with the Stockholm at the end of July 1956. Events were both similar and different when comnpared with the sinking of the Empress of Ireland in the St Lawrence 40 years earlier. Fog was a factor in both and the ship which was struck in her side sank, while the striker survived afloat despite dramatic damage to her bow.  The differences were that almost everyone survived the sinking in the Andrea Doria because she took 11 hours to die rather than 14 minutes for the Empress.  Most of the dead were from the impact of 12,000 tons of steel-plate appearing in passengers' cabins as they prepared for bed. Fourteen year old Linda Morgan miraculously finished up on the bows of the Stockholm which had just killed her sister and plucked her from their bunk at the point of impact. But that's an anecdote, here are the data:
Ocean-going liners in 1956 had radar fitted-as-standard which should be a great help in notoriously fog-bound seaways like the St Lawrence or South of Nantucket but sometimes kit lulls you into a sense of complacency and dependence rather than relying directly on your eyes. ears, common sense and the rules of the road at sea.  In at least the Stockholm's case but probably the Doria's as well, there is a strong suspicion that the Bridge didn't really know what the range-setting was and assumed that the blip representing the the other ship was three times further off than she really was.  This was partly a design flaw: the range-setting was virtually invisible in the darkened bridge - one of the subsequent recommendations being to have a binnacle light for the radar as there had long been one for the compass.

Another point is that the Stockholm's officer of the watch, outbound from New York and experienced on this route, was expecting incoming craft to run very close to the Nantucket light which he believed was well to the North of him. Seeing a radar-blip representing a ship very fine on the bows, his brain said "must be on the port bow" and it was hard to shake that conviction when the Andrea Doria burst out of the fog bank.  His reaction was turn right, which was, in addition, the correct Rule-at-Sea where ships pass port-side to port-side and turn right away from each other. But this was turning into the path of the oncoming liner.

The Doria's helmsman seeing disaster approaching instinctively shied away from the source of danger but, if the Nordling diagram above is close to correct, it was too late and his ship was whacked just behind the bow and tin-opened from main-deck to waterline. The damage was thus similar to that sustained by the Empress in 1914 but coming in from the Ocean and in fog the Doria's water-tight doors were all closed according to regulations.  Nevertheless the ship heeled to starboard and started to settle. That meant that half the life-boats were unavailable for normal loading when the Italian captain ordered Abandon Ship. Nevertheless, the first three life-boats which rowed from the stricken ship towards the comparative safety of the Stockholm were heavy with crewmen and very light on passengers, let alone women-and-children. The crew of the Stockholm accordingly took time off from saving their own ship and picking up survivors to duff up their fellow sailors who had abandoned their duty.  That might remind you of the Costa Concordia which ran aground and tipped over in Jan 2012.  It was said at the time that Captain Francesco Schettino was the first off that stricken ship to "go and seek help".  Not the done thing in my father's book. The crew of the Stockholm then went back to saving a final tally of 570. 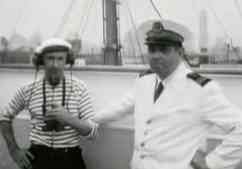 Perhaps the hero of the hour was Captain the Baron Raoul de Beaudean captain of the Île de France the aged pride of the French merchant marine. Beaudean (seen R with his radio-operator L) (русский) put the needs of his passengers, his company and their shareholders on the back-boiler and turned his ship around to help with the rescue. By forming a lee behind which the Doria found some shelter from the elements and by shuttling his own life-boats back and forth between the wreck and safety, Beaudean plucked 750 people from the unforgiving sea, fed them, re-clothed them (with generous help from his passengers) and brought them on to their destination in New York.  Now that's a chap of whom my old man would have approved.
Posted by BobTheScientist at 07:23