The Interstate network across the USA was an amazing piece of infrastructural engineering provided by the Federal government to link the 50 separate countries that make up the republic. Although strictly the section in Hawaii and Alaska should surely be Intrastate highways. It was obvious that such network would benefit trade and travel and tie the nation(s) together.  President Eisenhower signed the enabling legislation into effect in 1956 and 35 years later the initial plan was completed, at which time nearly 80,000km of highway criss-crosssed the country. Road-building is both nirvana and bread-and-butter for civil engineers with all sorts of problems for which creative, robust, redundant solutions must be found. Many of the problems involve the destructive power of water; and drains, culverts and bridges are integral to any highway project. The Interstate project was the terrestrial NASA of its time, creating thousands of jobs and boosting the US economy.  It required the shifting of 30 billion cu.m of earth - about 100x more than for the Panama Canal and contributed enormously to the global carbon footprint because "The concrete used to construct the Interstate System could build a wall nine feet thick and 50 feet high around the world’s equator. "

President Eisenhower was personally and particularly interested because as a young US Army Lieutenant in 1919 he had been part of a logistics experiment in which the US military wanted to see how many soldiers how quickly could they ship from the East to the West coast in the event of war. The answer was a very disturbing not very many, not very fast.

The 50,000 bridges, 25% of which were built at the height of NASA/Interstate mania in the late 1960s, were mostly made of steel because it was desirable to support the US Steel industry where a lot of blue-collar voters were employed.  This was back in the day when Americans built things and created hardware before this dirty dangerous and physically demanding work was peeled off to the Third World and the American economy, like that of Europe, started to subsist on shifting electrons rather than trainloads of coal.  It was a huge pork-barrel and lots of engineering and construction firms got their forks out.  Nothing lasts forever, except Roman aqueducts, and a lot of that hardware is now reaching the end of its useful life. In 2006 Presdent Bush signed a new law to authorise a spend of $300 billion for upgrades. in some cases this was boondoggle. There have, nevertheless, in recent years, been some catastrophic collapses and they make for interesting reading for scientists and engineers and anyone who does the best they can with the material world.

One visually obvious problem is spalling in reinforced concrete, not caused by heat but by the corrosion of the interior steel rods which expand as they oxidise and eventually pop off the exterior concrete which exposed more steel to the air and water.  It is not helped by firing out salt and other de-icing agents every winter, the electrolytes of which greatly speed up the process.  But Engineers build with redundancy and you can lose a certain amount of the volume of the supporting structures and still be within engineering specification.  Another problem is that nobody in 1956 could imagine the volume of traffic at certain key bottle necks in the system.  It's known by anyone who has watched Thelma and Louise or Paris, Texas (Whoop whoop Wenders alert) that you can go for miles and miles without meeting another car on much of the network but at places like Bridge 9340 in across the Mississippi in Minneapolis as many as 140,000 vehicles a day would be travelling along I-35W and most of those in the crush of rush-hour.

On the evening of 1st August 2007, Bridge 9340 was jammers as usual, actually worse than usual because they had closed 4/8 lanes of the deck to repair the surface.  Like many bridges in the Northern states it took a pounding in the winter with the salt, grit and de-icing solutions. So resurfacing was a regular requirement but it required that 250 tons of additional weight (sand, cement, water, machinery) was also on the bridge; not to mention an extra 50mm of concrete above the original specs that had somehow accumulated on the road bed from previous repairs.  ANNyway, at 1805hrs the centre span over the Mississippi collapsed and dumped more than 100 vehicles including a loaded school bus, their occupants and a score of construction workers 30 meters down into the river.  The emergency services from city, county, state and surrounding municipalities responded with commendable speed and efficiency, not least because such a collapse was one of the exercises that they had all carried out together. So only 13 people died and 100 were seriously enough injured to go to hospital. 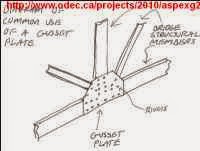 It turned out that fatigue cracks had appeared in many of the spans over the years but that bracing these by drilling additional steel plates was deemed likely to cause more stress, more immediately than leaving them be.  The cracks had holes drilled in their ends to limit propagation.  The accident investigators finished up pointing the finger at inadequately specified (13mm)  'gusset plates' which hold the trusses together with steel bolts. Inspectors had noticed and photographed bulging gusset plates under the road-deck as early as 2003 but just added that to their conclusion that the bridge, along with dozens of others across the US, was 'structurally deficient' but reached the "minimum tolerable limits to be left in place as it is".  4% (N=4000!) of the bridges classified as 'heavily used' are reckoned to be in less good condition than the bridge over I-35W.  We're going to Boston in a couple of weeks time, I shall be whistling nonchalantly as we cruise along the elevated sections of I-90.
Posted by BobTheScientist at 06:53