The last refuge of the scoundrel

A month ago my street cred at The Institute was given a boost because I had organised a conference which brought all kinds of VIPs from the major Universities of the country to our humble education factory in the Midlands.  The conference was awash in the cross-discipline of bioinformatics and molecular evolution in which I spent twenty-five years swimming, and it was great to be able to host all my pals and Bring The Word to our own students.  One of the key analytical tools of the field is the idea of multiple sequence alignment MSA which enables you inter plura alia to track details of the evolution of protein sequences. This tool has been seen by our colleagues in the Arts Block as having value in comparing text as it accumulates typos with each transcription. Before printing, which is long-and-long before computers, copies of texts, sacred and profane, were made by a hand holding a quill pen and errors used to propagate. MSA has been used to identify the original copy of Chaucer's Canterbury Tales from among the dozens of manuscripts which have survived. That's scholarship. I've also used the technique in a weirdy way to compare the order of digits in the transcendental numbers e, Phi and Pi.  I still don't know what my analysis means and encourage my highly intelligent Ukrainian and Russian readers to stop bickering about Crimea and help me out on that one. спасибі! or even спасибо! 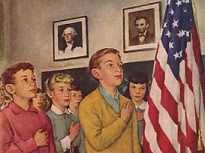 Now I'll park the numbers and get back to aligning and comparing plain text to see how it evolves in recent historical time.  I didn't know much about the Pledge of Allegiance which American school-children do at the beginning of every school week, except that The Boy pledged it with everyone else when he was in primary school in Boston 30 years ago.  I didn't twig, for example, that it is a comparatively recent addition to the political landscape of the USA. It was invented by a Baptist minister turned socialist called Francis Bellamy in 1892 as part of the celebrations of the 400th anniversary of the arrival of Christopher Columbus in the New World. Bellamy agonized about the exact wording; filleting part from Liberté Egalité Fraternité because he knew that equality was a long way in the future for a) women and b) blacks in his country. "Indivisible" acknowledged that the nation was still smarting from a bloody Civil War which had ended less than 30 years previously. 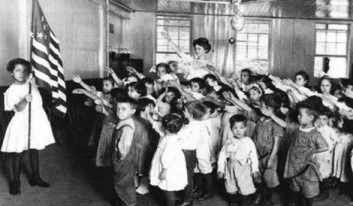 His original version was simple, sincere and accompanied by a salute which required each child to raise his/her right hand towards the flag. Ahem! That was changed during WWII yielding the high-ground of expansive salute to mein Führer and his brown-shirts; but replacing it with a hand to the chest which, to me, has equally embarrassing overtones of breast-beating.  Over the next 60 years, The Pledge got longer and more obvious and idiot-proof until, on this day 60 years ago. President Dwight Eisenhower added a final nail by inserting "under God" after "one nation". So Jefferson's Republic finally and explicitly became a theocracy, and 14th June is designated Flag Day to recognise the adoption of a flag by the founding fathers on that day in 1777.