Arrrh, things allus come in threes. In April last year, to celebrate his birthday, I noted that Jan Jansky did a better job, earlier, of sorting out the nature of ABO blood groups than Karl Landsteiner, who gets all the credit. Last Wednesday I wrote about how botanist Donald Schnell was scooped in one of his discoveries by a humble glass-blower a hundred years previously.  The following day, I was meandering through the lanes of South Dorset near where my aged and honoured mother lives.  I wound up with a slightly tongue-in-cheek acknowledgement that The Yetties hail from the village where my Mum does the shopping.  I was pecking about at this rabbit hole when I discovered that Benjamin Jesty had been born in the same village of Yetminster nearly 300 years ago.  I'm amazed that I didn't already have this information in my noddle because Jesty is a third example of unacknowledged/unknown investigators.  I mention him at the start of every lecture-course in physiology or environmental chemistry.

Like Landsteiner and ABO blood-groups, any fule kno that vaccination was invented by Edward Jenner.  In May 1796 Jenner inoculated 8 y.o. James Phipps (without informed consent) with cowpox ‘matter’ from the hands of Sarah Nelmes, who had caught cowpox from a cow called Blossom (you couldn't make this up!).  In July 1797 inoculated the boy with smallpox and noted that he developed no disease.  At that time and long after, smallpox was a scourge in Europe, in the times Jesty and Jenner, the virus was carrying off 400,000 people in Europe every year.  As the mortality rate in children was as high as 80% and the survivors were likely struck blind from corneal scarring or disfigured by the facial pocks, Jenner was taking a bit of a risk with young Master Phipps. 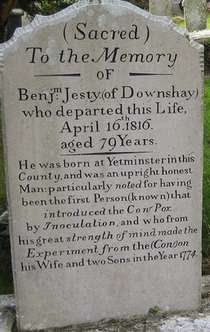 But 20 years earlier in 1774, as an epidemic of smallpox was coursing through Yetminster, Jesty took his wife and two sons to Chetnole, a hamlet just down the way, where there was a cow with cowpox.  Using a needle he removed some 'matter' from the cow's udder and scratched it into the arms of his family.  As a farrrrmer, he'd already had the cowpox. The inoculees survived the vaccination, although it as touch-and-go with his wife for a while, and came through the smallpox epidemic as well.  The local yokels greeted this successful application of science to saving life with pitchforks and torches and Jesty was "hooted at, reviled and pelted whenever he attended markets in the neighbourhood".  Around the time Jenner was doing his work, Jesty and his family pulled up stakes to farm in a different part of the county, where you can see his grave.

What matter?  It matters thus: Jenner was given a total of £30,000 as a reward for his services to the eradication and control of smallpox.  In today's money that is close to £7 million at an average inflation rate of 2.731% (rate from WolframAlpha).   There are at least six other claimants to having been the first to discover the efficacy of vaccination - apart from Jesty, John Fewster from Gloucestershire and Jobst Bose from Gottingen seem to have pretty good claims for priority.  But just like Harry Potter, Jenner swept all.  No fair!  No Fair!

And having started this post with ABO blood-groups we should bring it full circle by noting that my pal Stefan Adalsteinsson has hypothesised that smallpox, being particularly virulent against people with A and AB blood, has served to elevate the frequency of "O" in Iceland.  But there is no such effect in Madras, India, so you may take Stefan's result with a pinch of salt.  ABO blood-groups have been associated with numerous pathologies apart from smallpox: cholera, TB, syphilis, yaws, gonorrhoea, mumps, candida and malaria and many others too difficult to spell.
Posted by BobTheScientist at 06:31