The bog-standard bacterium, it's a pity it's so hard to spell.  It looks forrin dunnit?  I couldn't possibly look at the word long enough to remember that the first consonant cluster is sch and the last ch.  So it's almost always written E.coli. The reason we call it Escherichia coli is becauase it is named for its discoverer Theodor Escherich whose birthday (29 Nov 1857) falls today. He died of a very interesting stroke: he had a headache, began speaking several different languages on ward-round and succumbed the following 1911 day at the age of 53.  He was much too modest to name the common enteric bacteria of childhood runs after himself and it wasn't until 1958, more that 100 years after his birth, that the unspellababble name really stuck. I mention childhood 'looseness' because in his day he was the Top Gun in paediatric infectious diseases, writing the definitive tome on intestinal diseases of children as well as books on Diphtheria and Tetanus. He studed in Paris under Jean-Martin Charcot eponymous co-discoverer of Charcot-Marie-Tooth syndrome, which I often use as an example in bioinformatics courses because it sounds so exotic and intriguing. La Leche League should raise a glass of milk to Escherich this day because he instigated a high-profile campaign to promote breastfeeding and its benefits for the intestinal flora.

But if I was looking for mere birthday tribs, like 16th June, there's plenty of choice for 29th November: CS "Narnia" Lewis, Christian "Red-shift" Doppler, Jean-Martin Charcot (cue Twilight Zone theme), António "lobotomy" Moniz, Jacques "Président" Chirac.  Of all these Wikipedia has chosen to front-page an unregenerate Nazi SS-Obergruppenführer Artur Phelps possibly because he was at one time Kurt "Bundespräsident" Waldheim's boss. 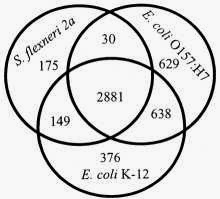 And rather than talk about looseness of the bowel when it is infested with some varieties of E. coli, I'll rant on a bit about the looseness of nomenclature when it comes to assigning names to bacteria. The Venn diagram at left is culled from a paper describing the complete genome sequence of a strain of Shigella flexneri, a cause of dysentry.  The numbers represent identifiable protein coding genes that can be identified in three strains of related enteric bacteria.  All of these chaps are Gram-negative gamma-proteobacteria, and one reason we assign them to the same group is that they all have a common core biochemical functionality controlled by about 3000 genes but they all have wildly different extra attributes.  Shigella, for example, has 175 genes which are not so much different from the other two strains, as completely absent from them: these include iron uptake genes and some enterotoxins.  It's not clear why Shigella should be separated into a different genus while the other two strains are lumped into the same species.

In the course Fermentation and Food Microbiology (Food& Ferm or F&F) we've spent a chunk of time investigating "Enterics" which are bacteria like Escherichia found in mammal guts and Salmonella typically found in bird guts but also Erwinia carotovora which as the name implies eats carrots.  One of our tasks has been to differentiate these boys from Pseudomonas and Bacillus using tools very familiar to Theodor Escherich 100 years ago.  Core to these tests are the Gram stain, which reveals half the microbiological world as pink and the rest purply-blue; the catalase test which fizzes (or doesn't) and the oxidase test which turns purple-maroon (or doesn't).  These are routine and dead easy to carry out on any bacteria that you can grow on a Petri dish - so that's what we do. You-the-bacteria get to be called Escherichia or Salmonella or Shigella based on the tests that we can carry out rather than on the key attributes (production of enterotoxins; sensitivity to antibiotics; dependence on available iron) that we can't measure easily but which might have serious epidemiological, medical and therapeutic consequences.  It's like looking for your car-keys under the only street light in the dark alley between the night-club and your vehicle.

Posted by BobTheScientist at 06:33