It's a strangely connected universe is the interweb. On the 6th November I mentioned an old flora that had intriguing and evocative lists of common flower names to supplement the rigid and rigorous Linnaean binomers by which biologists are required to refer to their favorite species.  I spent an hour or so trying to track down a proper reference to this book but to no avail. Nine days later I was whacked upside-the-head by this review of Geoffrey Grigson's An Englishman's Flora. It was obviously the same Flora! Although it's not nearly as old as I thought, having been published, just, in my lifetime. That evening I ordered up a 1996 reprint on Amazon and it arrived, by a tortuous route, in my hands less than three weeks after I'd been memory-prodded about it after decades buried in my head's increasingly inefficient filing system.  Well it's just wonderful and, if you live in these WEA islands and have the least interest in etymology or the living world, you should secure your own copy ASAP.  Cheap enough second-hand on Amazon.  Two of the thre
e plants which I'm singling out today are named officianale, which means of the [apothecaries] office: they were known/believed to be pharmacologically active.

As I promised you by implication, the common names of the dandelion Taraxacum officianale, I'll write the whole list here. As Grigson says about another wordier entry, the longer the list the more likely that the plant was noticed for its, real or perceived, functional uses (pharmacopoeia, cosmetic, poisoning your father-in-law, causing sickness in your livestock). Bitter Aks, Bum-pipe, Burning Fire, Canker, Clocks, Clock-flower, Clocks-and-watches, Combs-and-hairpins, Conquer more, Devil's Milk-plant, Devil's Milk-pail, Dindle, Dog-posy, Doonhead clock, Eksis-girse, Fairy clock, Farmer's clock, Four o'clock, Golden suns, Heart-fever grass, Horse gowan, Irish daisy, Lay-a-bed, Lion's teeth, Male. Mess-a-bed, Milk gowan, Monk's head, Old man's clock, One o'clock, One-two-three, Pee-a-bed, Pss-a-bed, Pissimire, Pittle bed, Priest's crown, Schoolboy's clock, Shepherd's clock, Shitabed, Stink Davie, Swine's snout, Tell time, Time-flower,, Wee-a-bed, Wet-weed, Wishes, Witch's gowan, Yellow Gowan.  The name that's familiar to you in Somerset will baffle your cousin from Northumberland, even though you both speak English - that's why we have the Linnaean binomer.  Some of the names are readily understood: the white sap looks like milk, all parts of the plant are diuretic, the bald receptacle after you've blown the seeds off (to tell the time) looks like a tonsured head . . . if the owner has had the smallpox.  Gowan is a Scots/Lallans word for any white or yellow field flower. 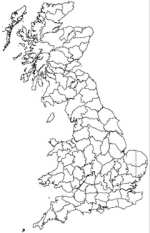 Dandelions are ubiquitous: found in all 112 vice-counties of Great Britain [see R] and all 40 in Ireland. A vice-county is a broad stretch of country with similar habitat. They are based on the old Local Government Act 1888 counties, so Wales is probably over-split.  Scilly gets binned with West Cornwall but the Isle of Wight gets its own. But the peony Paeonia mascula is found in only one vice-county and but a tiny part of that which is a 20 hectare island in the Bristol channel called Steep Holm. [Jakers, we're back to islands again] It is administered by Avon County [Bristol to you and me] while its neighbour, 5km North, Flat Holm is called Ynys Echni because it's under the Welsh flag.  As for the peony, it is a mystery as to how it got to this one isolated location so far North of its Mediterranean range. Botanists have gotten all exercised about whether it is native to the area or introduced and doubtless they have some rules for distinguishing among a) appeared after the ice-sheets retreated after the last glaciation b) was planted by an unknown herbalist when monks briefly inhabited the island in the 13thC c) fell out of the pocket of a Napoleonic era visitor.  It's barely 'there' in any case - growing in two clumps halfway up the cliff-face.

In the New Forward to the 1996 re-issue of An Englishman's Flora, Sophie Grigson the telly-cook [and his daughter] waxes lyrical about the comfrey Symphytum officinale fritters that her Dad used to cook up for the family.  Hmmm, very nostalgic but perhaps not such a good idea because comfrey is a known carcinogen in rat livers probably because of the high titre of the pyrrolizidine alkaloids [like retronecine, structure shown right] in the plant.
Posted by BobTheScientist at 07:02