I originally called these column-inches Science Matters as a declaration of belief (because it does!) with a subtle acknowledgement of the other meaning of matter as 'stuff' which enabled me to rabbit on about whatever appeared uppermost in my 'mind' when I sat down to write my daily piece.  One thing that exercises me in a groundswell or background sort of way is trying to work out how to Do The Right Thing - how to live properly. Researching this dawn-of-man conundrum allows me to surf widely over the wireless airwaves (well at least as far as Newstalk-FM) and the blogosphere (front page of Wikipedia and a handful of blogonsolidaters like Metafilter and 3quarksdaily) . . . I haven't got all day to do this sort of stuff so some of the cuts are short.

Today's Featured Article on Wikipedia a couple of days ago was about the Siege of Godesburg: one of the opening events of the Cologne War in 1583. This was a ghastly prelude to the 1618-1648 Thirty Years' War which consumed Central Europe in a bloody mess of clashing antlers and murdered peasants as protestant and catholic magnates jostled for principle and principality.  In the middle of the previous century at the Peace of Augsburg (1555) the principle of cuius regio, eius religio [the locally established religion was to be that of the top gun - be that king, knight, bishop or castle] had been established. With the protestant reformation sweeping through the continent, particularly in the chillier Northern half, everyone recognised that it was easier to assign territory to one side or the other and so the catchy and memorable Latin tag was adopted as a rule of thumb in the hope of a peaceful way forward.  The ecclesiastical reservation was an exception to this rule: if the local ruler was a prince of the church, he was not entitled to change the religion of the local people on the whim of changing his own set of religious beliefs.

In 1582 Archbishop Gebhard Truchsess von Waldburg, the Prince-elector of Cologne (a catholic) fell in love with Canoness Agnes von Mansfeld-Eisleben (a protestant) and she with him.  Being more beautiful she managed to convert him to her faith, and her brothers insisted that they get married.  So far, so romantic; but Gebhard, rather than resigning his see in accordance with the reservation, attempted to turn his Cologne into a secular princedom with himself and Agnes in charge. The Chapter (lesser members of the ecclesiastical hierarchy) were having none of this and elected another archbishop Ernst of Bavaria . . . and so the Cologne War began. 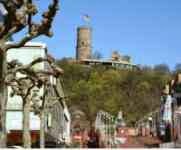 Schloss Godesberg [seen R towering over the town of the same name on a recent sunny day] was a key fortress in the principality, on the road between Bonn the territorial capital and Cologne the economic powerhouse.  It was built on the top of a natural eminence and had over the centuries been fortified and garrisoned. Gebhard the Calvinist installed Oberstleutnant Felix Buchner with Eduard Sudermann, Captain of the Guard, as his second and a force of 180 "Dutch" [and hence Protestant] mercenaries to defend the strategic stronghold.  In November 1583, forces loyal to Ernst the Catholic laid siege to the castle. The religious differences added an extra bit of needle to the conflict. [your mother is a hamster etc.] The castle seemed to be more or less impregnable to normal cannonade and the besiegers eventually decided to dig a hole in the side of the mountain, fill it with 700kg of gunpowder and blow it up.  The explosion sheared off one face of the hill and carried away that side of the fortifications but the defenders retreated to the central keep and continued to defy the assault.  The Bavarian troops had been at this palaver for a solid and wintery month and were severely pissed off, especially as they had gained access to the castle after the explosion by worming up through the shit-hole. Buchner entered negotiations with his opposite number for free passage for himself, his wife and Sudermann his lieutenant.  These were concluded with difficulty and the losing officers, together with some catholic hostages, were escorted off-site by the winning officers through a mob of truculent and whiffy soldiery.  Everyone else, who were after all only Dutch mercenaries and their dependents were hunted down and slaughtered . . . it took the rest of the night to find and kill everyone.

Clearly from the high moral ground, looking back 400+ years from your sofa, Buchner and Sudermann were not behaving in the tradition of officers and gentlemen.  But before you get altogether too judgmental, ask what you would have done in the circumstances.
Posted by BobTheScientist at 07:11