Hill Top Farm in the English Lakes is the enduring legacy of now world-famous writer and illustrator Helen Beatrix Potter.  She is famous for her ditsy children's books, starting with Peter Rabbit [L].  Luckily her family "had money" because when she hawked her biologically accurate anthropomorphic cutesies round the publishing houses of late Victorian London nobody was interested.  For £11 she published a limited edition which was very well received by family and friends. Publisher Frederick Warne accordingly "took a risk" and have been coining it ever since.  £11 sounds like buttons, but an agricultural laborer in 1900 was bringing home less than £1 a week, so it helped to "have  money". 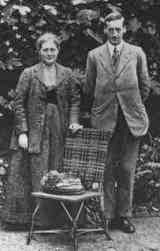 You could do worse than hunt out the film Miss Potter starring Renée Zellweger and Ewan McGregor (full film in ten etiolated fragments with eSpanish subtitles): it's got a lovely sound-track, no car-chases and an upbeat ending: my sort of film but fluffy. The up-beat ending hinges on the fact that with the proceeds of her books she accumulated a huge land-bank in the English Lakes starting with Hill Top Farm which is now the centre for coach-loads of groupie-tourists.  She was rich, she was astute and she didn't alienate too many of her neighbours. She bought the abutting farm and then other parcels of fells and valleys to something in the region 1700 hectares. She sank further money into developing these, occasionally moribund, holdings into productive farms mostly given over to sheep but supporting a sustainable mixed economy of other livestock, quarries and timber.  When she died in the middle of WWII she made over this incalculably valuable resource to the National Trust and when her husband died 18 month later, the rest of the estate came to the NT as well. The picture shows them the day before they got married. It is likely that, but for this vision and generosity, there would be nothing for the tour-buses to bother with in the English Lake District.  Her reputation for sheep-breeding and -husbandry was legend in the region and she was often asked to judge competitions at agricultural fairs.

It might have been different, she might have been a scientist. Indeed, some people claim that she was a scientist who made significant contributions to the study and identification of fungi, especially in their associations with algae to form lichens. In those unthinkingly sexist times, women were widely believed to lack the intellectual capacity to follow a logical argument, gather reliable data, or form and test hypotheses. Miss Potter was born the same year as Maude Delap over in the West of Ireland who made waves in the world of the development and reproduction of Cnidaria including jellyfish. Because Miss Potter was very well-connected in Victorian London she was able to get alongside competent mycologists and other naturalists with whom she bounced her ideas around. What she learned from these learned men about physiology, development and evolution undoubtedly improved the accuracy of her drawings. That's an interesting comment on the psychology of perception: you can't draw what you can't see and you can't see what you don't understand. One of these insiders read her single scientific paper "On the Germination of the Spores of Agaricineae" to the Linnean Society in 1897. She was not eligible to do this for herself because she lacked a penis. Some comments were made on the paper and, as was normal practice, it was returned to the author for revision.  She withdrew the paper from the publication process and it seems to have disappeared, so nobody is quite sure how much of a contribution to the study of fungal development it was. She continued to draw fungi and lichens with meticulous care and attention to detail but didn't always know what she was recording. Her career in science was thus not meteoric, but it was handiXXapped from the beginning.

The other intriguing thing about the young Miss Potter is that for about 15 years from the age of 14, she kept a secret journal in a code of her own invention.  That's pretty determined: to write 300,000 words (about equal to the contents of The Blob) in an idiosyncratic code so that her parents wouldn't be able to intrude on her mind, the way they assumed the right to intrude on her external life. This diary stops abruptly 4 months before the Linnean Society escapade. I think she found her métier in recording the natural world that she loved and indeed just being in the natural world that she loved. It is unlikely that she would, given the prevailing inertia and prejudice, have had a more fulfilling life climbing mount impossible in Edwardian science.  And I for one am grateful to her for the many happy days I spent on top of the world in the English Lake District.
Posted by BobTheScientist at 06:26