We had a lovely day yesterday.  We drove 180km West to Cork to celebrate the 18th birthday of Dau.II who left home at the beginning of the summer to seek her fortune in the wide world.  She is mad about the cooking right now and has a flair for it particularly the cake department.  A few years ago we cut down a small ash tree (Fraxinus excelsior) and took the trunk off to one of the last working water-driven saw mills to be planked.  I intended to make a kitchen table from the 30mm thick planks but shortly after that we bought the last (slightly shop-soiled) table from the Shaker Store in the Quaker village of Ballitore Co Kildare as they went out of business.  So the planks languished for several years without an obvious purpose.  Then sometime last year Dau.II said she would cut them up and make them into chopping boards as gifts for her friends-and-relations. That didn't happen but today, after a couple of hours work planing and sanding, I presented her with a chopping board cut from a tree whose roots are still locked in the soil of the place where she grew up (she couldn't walk when we bought the farrrrm).  I think that's rather mystical: like Odysseus carrying a oar ἀθηρηλοιγός into the far north in his old age.  Whenever and wherever she cuts an onion and dices some carrots she'll be home. 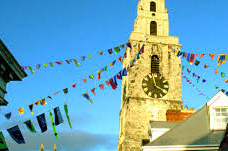 After lunch at The Strasbourg Goose - slap-up feed; too much meat; can't eat cake - rather than Micheal Pollan's more civilised "'Eat food. Not too much. Mostly plants" we went North to St Anne's, Shandon to ring out Happy Birthday on their octave of bells.  These are the Shandon Bells famous in song and story and the church is rather fine.  This summer they have hosted a Community Arts project involving as many as 1500 people from the locality.  They made some hundreds of flags all shapes and colours and strung them from the bell-tower of St Anne's in a dozen of the most beautiful catenaries (which as any fule kno is a hyperbolic cosine function).  Catenary comes from the Latin word for chain catena, same root as the cadena humana that stretched across Catalonia last week.  As it was blowing a gale yesterday these colorful catenaries were often curving horizontally rather than than sagging heavily like chains tend to do and they were making that wholly evocative whukkering sound that flags make in Kurosawa films.  But like a kitchen board carved out of a tree from home, these strings of flags seemed richly symbolic: created by the community, anchoring the celestial to earth, circling time itself, tying mother church in knots . . .
Posted by BobTheScientist at 06:34