When we bought the farrrm in deepest rural Ireland, Dau.II was not yet walking and Dau.I was still very short. They never went to school, but seem <amazingly> to have taught themselves how to read and write and cipher and treat each other and strangers with kindness and dignity. If they weren't spending 5 hours a day crammed into a room with 30 other small children and one distracted adult, what did they do to pass the time? Well they read a lot of books, watched a lot of DVDs, and shovelled a lot of chicken shit - if you want eggs and there are no shops anywhere close then you have to keep hens. Those eggs were broken into a lot of cake batter. But these domestic chores needed a certain amount of leaven lest they get stodgy and so the girls spent a lot of time in the car on the way to shops or singing or dance or tin-whistle or play dates. The car-time was talking book time but also round the houses and round the universe conversations like one of the last car journeys I made with Dau.II before she, like her sister, left home for the wide world. If The Beloved couldn't face the car and/or it wasn't raining stair-rods, they'd all get unto wellington boots and head up the hill to the mountain. As the legs grew longer so did the expeditions.

If the party descended from The Mountain Gate into the valley through the now ruined homestead of Hickey's, they could lay out the picnic things on the one part of the scenery that wouldn't be wringing wet: 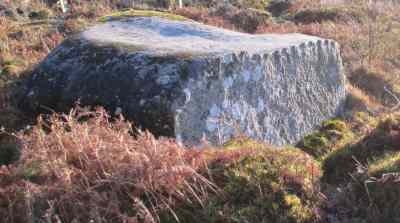 This boulder became known as Storyrock for another part of the ritual: after lunch, stories would be told. I missed this whole chapter of their lives because I was off with the fairies in Dublin pushing the frontiers of science. When I finally got to visit Storyrock, many months later, I was amazed by the vertical side and the explanatory row of evenly-spaced indentations along its top edge [shown above R]. These were where the wedges had been driven to split off a whole slice of rock - for lintels and gateposts - as explained previously.  A chemo-geo-morphological analysis would reveal if our lintels came from Storyrock. I also noted that the top face of Storyrock was decorated with some crudely written letters. Sometime about 2010, in the wake of the discovery of the Ringstone, I went up with a camera to take photos of these presumed signatures of the rock-cleavers. They were crap - the photos not the cleavers - because the rock surface is a riot of lichen and moss, and dips and rises, against which the letters are hard to make out.  I was advised to prep the surface with shaving foam and a squeegee which would emphasise the indents and null the distracting colour changes. But I gave up shaving decades ago and it never happened.

Then last month the Hickey homestead was vandalised by agents of the ESB and I rose early one morning just as the sun was rising <caution Hoss-alert> to document the Aftermath. Storyrock was struck by the oblique light so that the shadows did duty for shaving foam at no extra cost [duty-free harharhar]. So now, I am able to reveal the names of the 19thC stone-masons of Knockroe, before the art of petrographology became more or less lost in the scream of con-saws:
Hobi:

If Adolf Hitler's brother Alois could work as a penniless waiter in The Shelburne Hotel in Dublin before WWI; I see no reason why a relative of Großadmiral Admiral Karl Dönitz couldn't be working as an itinerant stone-splitter at about the same time down the country.

Obviously further work is need on deciphering the message in these carvings but I put it to you that they are as important to Ireland's history and heritage as the the markings on the Ringstone. The world expert on the decorated stones of Ireland, Chris Corlett, replied to my announcement "I agree with you about the importance of this type of material, which is actually quite rare. I have often been surprised by how infrequent this type of carving is, especially in stone cutting areas". It's not only about the Kings and Queens and Heads of State, the humble workers They also serve who only strike a wedge. Milton.

Vernacular rocks!
Posted by BobTheScientist at 07:21